Like Measure for Measure and The Tempest, The Winter’s Tale is one of Shakespeare’s “problem plays.” Considered a romance, the play often feels a bit schizophrenic: It involves tragic situations (morbid spousal jealousy, cruel tyrannical behavior, unnecessary deaths) leavened with broad comedy involving a hilarious pair of dopey shepherds and a manipulative con man. And, true to Elizabethan comedic formula, it ends with a group wedding. Above all, the world of The Winter’s Tale is one of excess, especially that of extreme action, and that excess casts a bit of a pall over The Shakespeare Theatre of New Jersey’s final production of the season. 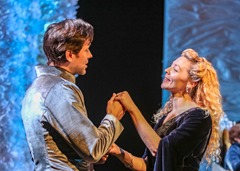 First off, the convoluted plot of The Winter’s Tale is often improbable and ludicrous. From the opening scene, King Leontes Sicilia excessive and demonstrable attention to his queen, the lovely and, as we are told several times, virtuous Hermione, raises red flags about the solidity of their relationship and his maturity. Overcome by jealousy when he perceives the pregnant Hermione acting too attentively toward their houseguest, his boyhood friend Polixenes of Bohemia (left, Erin Partin and John Keabler), he rashly imprisons her, and after she gives birth to a daughter, he instructs his general Antigonus to abandon the child, an act that brings about Hermione’s death. 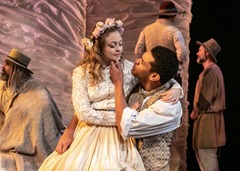 Fast forward 16 years: That daughter, aptly named Perdita (“the lost one”), rescued and raised by a family of shepherds, has matured into a lovely young woman who has caught the eye of King Polixenes’ son Florizel (Right, Courtney McGowan and Ryan Woods). In the face of his father’s disapproval, the couple flees to Sicilia where, after even more complications, Hermione is restored to life and husband, and the lovers wed.

Adding to the feeling of excess, the performance clocks in at close to three hours (including a 15-minute intermission); the first act is one hour, 45 minutes long! The second act has a disquisition by the rogue Autolycus (played with arch manipulation by William Sturdevant) that feels interminable. Some judicious cutting would be in order during his two stretches onstage. That Shakespeare appears to throw in every ingredient common to Elizabethan drama also draws out the action. It’s all there: violence, madness, revenge, disguises, mistaken identities, goofy rustics who act more honorably than the nobles, and the redemptive marriage at the end.

Even Jon Barker’s performance as the obstinate and immature Leontes, approaches “scenery-chewing” heights as he suspects his wife of infidelity. Barker (right) shakes, his eyes bug out of his head, he paces, he explodes; he’s having a nervous breakdown before our very eyes! While this outlandish reaction to the friendship between his wife and boyhood friend is warranted in the plot, it is uncomfortable to watch and borders on laugh inducing. This behavior stands in stark contrast to the way he interacts with his son Mamillius (the adorable Jeff Lin), making his unbridled jealousy even creepier.

Bonnie Monte directs The Winter’s Tale, “a sad tale…best for winter,” on a magical, fairy tale set designed by Brittany Vasta with snow-covered moveable panels, chandeliers with icicles hanging from them and costumes in a palette of somber colors (designed by Nikki Delhomme and coolly lit by Tony Galaska) that match Leontes’ coldness as he accuses and subsequently punishes Hermione and her newborn daughter. In contrast, the pastoral landscape of pastel tones and bright daylight telegraph Bohemia’s warm life and spirit. As scenes switch frequently and the mood changes, the large cast moves effortlessly around the stage. 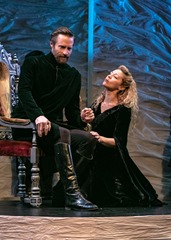 Perhaps most important for modern audiences, Shakespeare has created a trio of formidable women in this, his next-to-last play. As Hermione, the object of Leontes’ anger and distrust, Erin Partin gives a luminous performance that immediately arouses our sympathy for her. Loving toward Leontes (lots of public displays of affection reinforce her feelings for him), she’s all too willing to extend the hand of friendship to Polixenes (played with elegance by John Keabler), unaware perhaps that she overdoes it a bit and sets off her insecure mate. She’s especially lovely in the penultimate scene as a statue who later comes to life. So good is she that there’s not an ounce of animosity in her reaction to her husband’s change of heart. 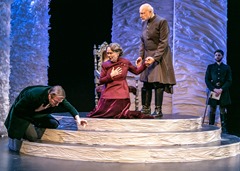 Marion Adler’s loyal physician Paulina (Right, center, with Barker and Robert S. Gregory) defends Hermione aggressively, talking back to the king despite what he can do to her. No shrinking violet she. And as the lost daughter Perdita, Courtney McGowan projects a sweetness learned at the feet of her foster father, the Old Shepherd (played with good nature and inherent goodness by Ames Adamson) coupled with a nobility inherited from her biological parents, especially her mother. (Above: Jon Barker, Erin Partin) 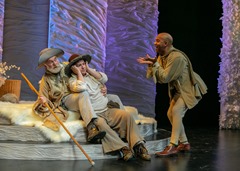 Patrick Toon and Raphael Nash Thompson are fine as the steadfast, principled courtiers Camillo and Antigonus, respectively. Seamus Mulcahy (left, center, with Adamson and Sturdivant) is wonderfully dense as the Young Shepherd, and William Sturdivant’s Autolycus gets laughs as he artfully parts the shepherd from his money and his clothes! And Ryan Woods’ Florizel is winning as the Bohemian prince smitten with Perdita.

The last time STNJ produced The Winter’s Tale was December 2008. Unfortunately, what was true then (during the economic downturn) remains true today. As Monte says in her Director’s Notes, “[The play] focuses its important and urgent light on the need for ordinary people to do the right thing, to be good and to let their moral compass guide them when the world in which they live turns upside down.” Thus, despite its several shortcomings, the elegant 2018 iteration of this sad tale is worth seeing to make us feel better about ourselves and what we can do to heal our wintry world.

A Winter’s Tale will be performed at the F.M. Kirby Shakespeare Theatre, 36 Madison Avenue, Madison (on the campus of Drew University) through December 30. For information and tickets, visit www.ShakespeareNJ.org online or call the box office at 973.408.5600.