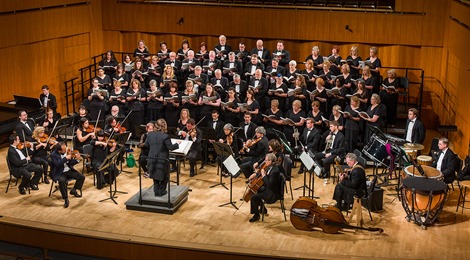 The centerpiece of the concert is Benjamin Britten’s A Ceremony of Carols, featuring the talented harpist, Stephanie Babirak. Written in 1942, the composition reflects America’s influence on the evolving musical style of Britten who was just completing a three-year residency in New York City. This popular melodic work, which recounts the Christmas story, was inspired by a collection of English poems written between the 14th and 16th centuries.

The chorus will also perform new settings of “Deck the Halls” and “The Holly and the Ivy” as well as holiday selections by John Rutter, Irving Berlin, Michael John Trotter and David Eddleman. The program includes the New Jersey premiere of Magnificat, a new composition by R. Wayne Walters, the founder and director emeritus of the Morris Choral Society.

Joining MCS for the holiday concert will be the popular sextet Express Male, formed five years ago as an independent vocal ensemble and now a regular feature at MCS concerts. The members of the group are John Collins of Raritan, Bud Leppard of Morristown, Chip Wood of Basking Ridge, Bill Walter of Oak Ridge, Albert Perkins of Philadelphia, Wayne Walters of Parsippany, and Rob Walters of Long Valley. Pianist Ken Rapp of Morristown is the accompanist.

ABOUT THE MORRIS CHORAL SOCIETY

The Morris Choral Society (MCS), now celebrating its 45th year is one of Northern New Jersey's oldest and most active and beloved not-for-profit arts organizations dedicated to enhancing community life by performing and presenting the highest quality classical choral repertoire from the last three centuries.

Since its founding in 1973, MCS has dedicated itself to the residents of Morris County and has played a significant role in Northern New Jersey's artistic community, nominated by its peers for the 2018 New Jersey People's Choice Award, Choral Group Division.

Traditionally each performance season includes two major concerts as well as several concert appearances at many of Morristown's annual celebrations: Independence Day, the 911 Observance, the Holiday Festival on the Green and First Night.

The MCS has performed with Judy Collins in her Christmas Show; with Dave Brubeck in La Fiesta de la Posada, at the Community Theatre at MPAC. The Morris Choral Society has received international recognition performing successful concerts in England in 1990, Ireland in 1994, Scotland and Wales in 1996, France in 1998 and Italy in the summer of 2000. The MCS has been represented by "ambassadorial" choral contingents in multi-choral units in Eastern Europe in 1997 and 2000.

Over the past 5 decades the MCS has assembled a vast and varied musical repertoire, the cornerstone of which is an impressive library of music from the Renaissance to the present. The MCS is funded in part by the Arts Council of the Morris Area through the New Jersey State Council on the Arts/Department of State, a Partner Agency of the National Endowment for the Arts. Additional funding has also been provided by the Arts Council of the Morris Area/Dodge Foundation Partnership. To learn more about the Morris Choral Society and its programming visit www.morrischoralsociety.org.