David Brahinsky & the Roosevelt String Band in a Two-Part Program: From Bible to Balfour 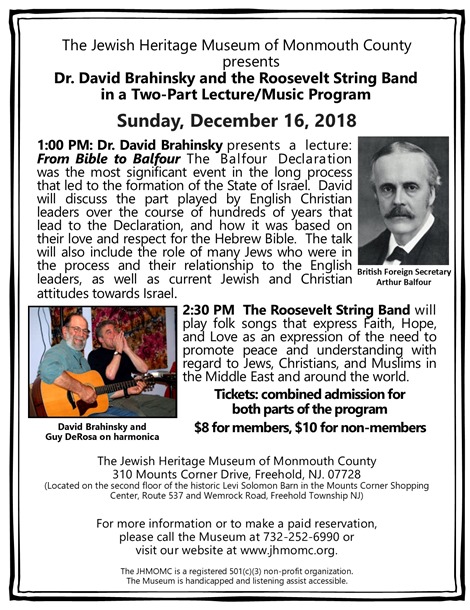 At 1:00 PM, Dr. Brahinsky will present a lecture, From Bible to Balfour.

The Balfour Declaration was one of the most significant event in the long process that led to the formation of the State of Israel. Brahinksy will discuss the part played by English Christian leaders over the course of hundreds of years that led to the Declaration, and how it was based on their love and respect for the Hebrew Bible. The talk will also include the role of many Jews who were also involved in this process and their relationship with English leaders, as well as current Jewish and Christian attitudes towards Israel.

Following the lecture, at 2:30 PM, David Brahinsky and Friends (The Roosevelt String Band) will present a concert, featuring songs that convey Faith, Hope, and Love as an expression of the need to promote peace and understanding with regard to Jews, Christians, and Muslims in the Middle East and around the world.

Dr. David Brahinsky is a Professor of Philosophy and Comparative Religion at Bucks County Community College and is the founder of the Roosevelt String Band. He has given concerts and lectures at The Jewish Heritage Museum in the past. He lives in Princeton with his wife, Naomi.

For more information or to make a paid reservation (non-refundable), call the Museum at 732-252-6990, or visit www.jhmomc.org. The Jewish Heritage Museum is located in the Mounts Corner Shopping Center, at 310 Mounts Corner Drive Freehold, NJ, at the corner of Route 537 and Wemrock Road (between the CentraState Medical Center and Freehold Raceway Mall).

It is on the second floor of the historic Levi Solomon Barn. The JHMOMC is a tax-exempt organization under Section 501 (c)(3) of the Internal Revenue Code. The Museum is handicapped and assisted-listening accessible.