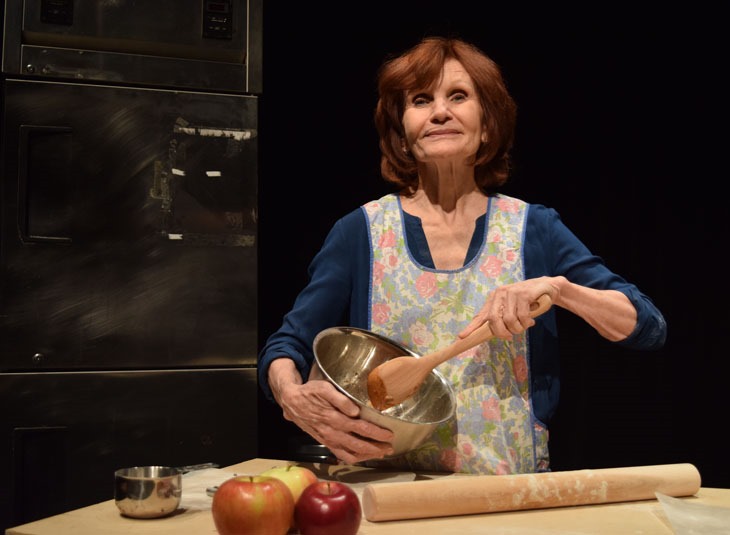 Three cheers for four women who have combined their impressive talents to give us a truly riveting, thought provoking, new play about a mother’s unwavering love for a son whose drug addiction led him to a cell on death row. First; the playwright, Jennifer Fawcett who has written this powerful play. Second, the veteran actress, Colleen Smith Wallnau, who gives a brilliant, gut-wrenching solo performance. (Attention:-drama students….she is providing a masterclass in acting); third ,the director Mikaela Kafka, a veteran of the CSC series who guided Collen Smith-Wallnau in more than staging, but in making an apple pie over the course of the 70 minutes (no intermission), and fourth, Catherine Rust, the CSC’s Program Director of the Women Playwrights Series, a leader in recognizing and providing new writing talent the opportunity to present their unique voice or perspective on our world.

The play is the award winning Apples in Winter *sponsored by the National New Play Network Rolling World Premiere series. It is set in a makeshift kitchen in a prison occupied by Miriam, the mother of an inmate who in seven hours is to be executed. As his “last meal” he has requested and been granted, not the usual hamburger and fries, but a simple piece of apple pie. Not any pie, but his mother’s apple pie, a favorite from childhood. Miriam’s son committed a violent crime 22 years ago while he was dealing with drug withdrawal which resulted in the deaths of two teenagers. The playbill is spot-on stating that “ this is a play about monsters and the mothers of monsters. And about how we care for each other. And about how to make a really good apple pie.”

The guilt consuming Miriam is not only how did she miss the early signs of his addiction, but most troubling, “what if” she had not refused his phone call pleading for her help that fateful night. In the eyes of many, she is more guilty of the horrible crime than her son….clearly, that is the opinion of the grief stricken parents of the two victims. Weren’t she and her late husband responsible for raising the boy to believe anything could be his? Were they lawn mower parents… constantly protecting him from the consequences of his actions?

It is a powerful play that deserves extensive exposure. It doesn’t provide answers to the growing problem of drug addiction and dealing with an addict, particularly a loved one, however, if addiction has touched your world you will find this theatre experience particularly important. Beyond the tough topic, the outstanding performance of this gifted woman is truly unforgettable theatre. 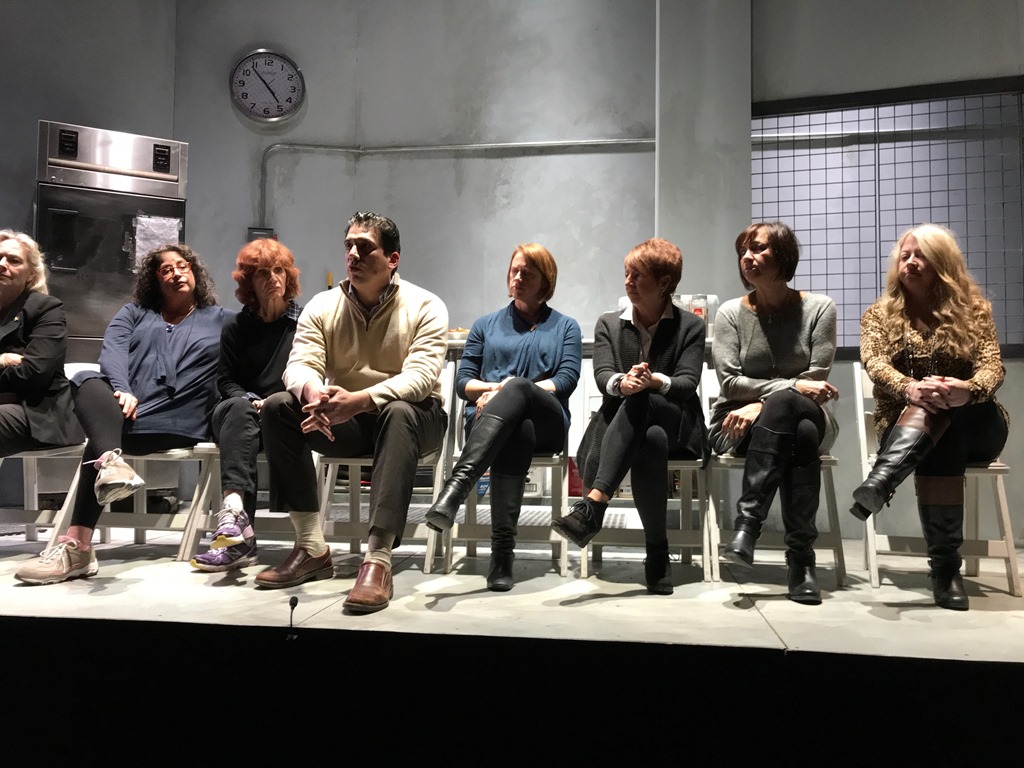 During the show's run, Centenary Stage Company has invited organizations that support people struggling with addiction and their families, including local group Parent-To-Parent, to set up information tables in the lobby. The Nov. 11 afternoon show included a post-performance talk back with the cast, creative team and Keith Morgen, who runs the Centenary University's Undergraduate Substance Abuse Research Team (photo above).

"We want to raise awareness about the support networks and treatment programs that are available," Rust said. "Sometimes people don't know what to do or where to go. There's also a really delicate line between supporting someone fighting addiction and enabling them."

The act of baking live deserves comment:"The baking of the pie is a kind of choreography," Fawcett said. "When is she mixing the dough? When is she slicing the apples?  Feeding your child is an incredibly intimate act. Emotions are fraught when they won't eat because you want to give comfort in feeding."

For tickets ($17.50-29.50) visit centenarystageco.org or call the Centenary Stage Company box office at (908) 979 – 0900. The theatre is located in the Lackland Performing Arts Center at 715 Grand Ave. Hackettstown, NJ on the campus of Centenary University.

*Apples In Winter marks the 75th new play to be a part of the NNPN RWP program with other productions being presented at Riverside Theatre (Iowa City, IA) and Phoenix Theatre (Indianapolis, IN). The play started as a one-page proposal Fawcett submitted to the National New Play Network, winning her the $10,000 commissioning prize.