Centenary Stage Company has launched the 2018-19 professional theatre season with Charles Morey’s chilling adaptation of Bram Stoker’s classic horror novel, Dracula.  Remember Bela Lugosi from the classic 1932 film  Dracula?  Well, Charles Morley, who has directed his own reinterpretation of this  perfect Halloween treat, gives us an equally malevolent Count Dracula. Marc Levasseur (left) with his powerful stage presence is outstanding as the King of the vampires (can a Count be a King?).  Levasseur’s Dracula towers over his prey constantly in the protection of the night to satisfy his unquenchable appetite for blood. We first meet him in his dark, gloomy castle in Romania’s Transylvania. He is “entertaining” a visitor from London, Jonathan Harker  (Christopher Young). Harker has arranged for the Count to journey to England to take up residence in an  equally gloomy, secluded Yorkshire manor house. Chris Young is impressive as the initially naïve lawyer, later as a fearless leader in the quest to stop the Count. 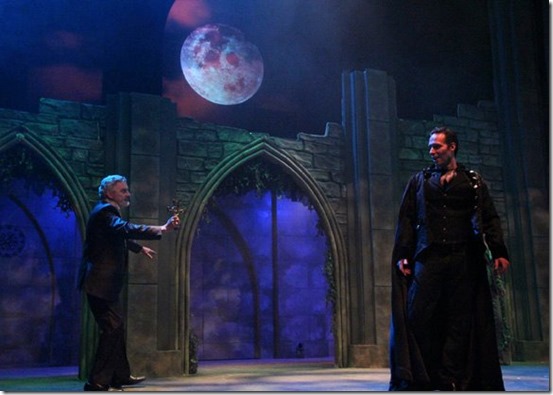 Count Dracula arrives in London with a cargo of his native Transylvanian soil—so he can rest between victims. Quickly he “seduces” several  beautiful young woman leaving them with nasty-looking puncture marks on their necks.  He can be stopped, or more likely paused, by a cross, garlic, or a piece of communion wafer. However, the city seems helpless against his frightful thirst. Only one man, the Dutch  professor Dr. Van Helsing (Carl Wallnau, above left, with Levasseur), can stop the bizarre feasting (or can he?). But to do this, he must uncover the vampire’s lair and pierce his heart with a wooden stake. Can I say that Wallnau “nails” the part? 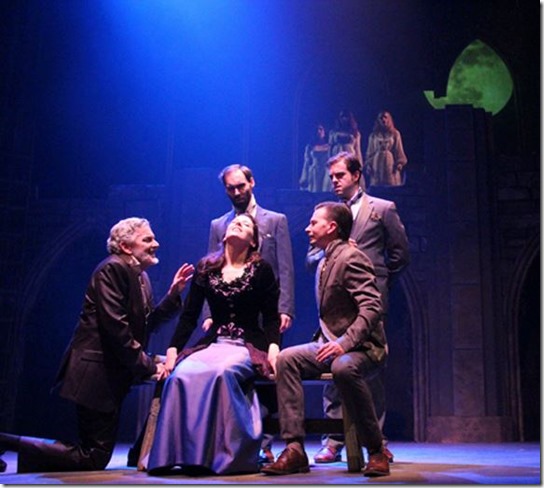 Featured in the cast of 16: is Emaline Williams (above) as the pious, strong willed  Mina Murray Harker excellent as a late Dracula target cursed by being forced to drink Dracula's blood. Can they save her? Miss Williams was a standout in the CSC’s recent production of Hitler’s Tasters. Earlier, Lucy Westenra; played by Haley Barna; is the Count’s first English conquest. Both women are terrific; particularly in their chilling bedroom scenes with Dracula…. the Seducer. 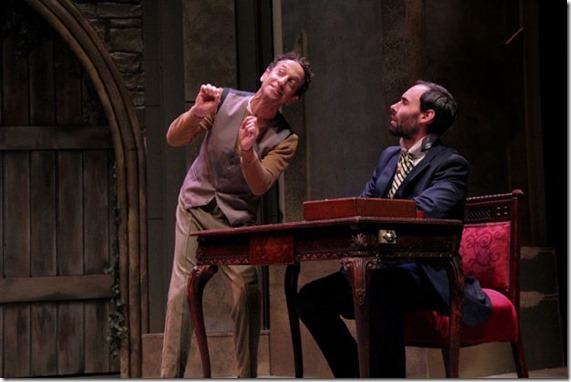 Writer/director Morley clearly deserves his own standing ovation. He has worked all the intricate pieces of this production as a chess master.
Even if you are very be familiar with the story from the book, or the many tv and film versions, this clever staging and impressive cast will provide a properly chillingly experience. Please see on a night with a full moon. Great date event.

Performances for Dracula run from October 12 to October 28. Specific performance dates are Fridays Oct. 12, 19, and 26 at 8PM; Saturdays Oct. 13, 20, and 27 at 8PM; Sundays Oct. 14, 21, and 28 at 2PM; Wednesdays Oct. 17 and 24 at 2PM and Thursdays Oct. 18 and 25 at 7:30PM. All performances will be held in the Sitnik Theatre of the Lackland Performing Arts Center. Centenary Stage Company’s production of Dracula is sponsored by season sponsor Heath Village and series sponsor The House of the Good Shepherd.