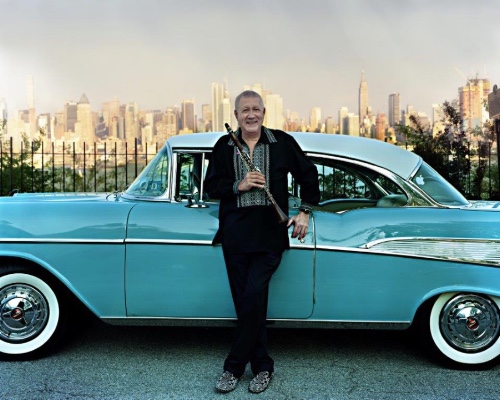 NJCU Alumni Jazz Big Band with Paquito D’Rivera
WHEN: Friday, September 14, at 6:00 p.m.
WHERE: J. Owen Grundy Pier at Exchange Place, Jersey City. In event of rain, the concert will be held in the Harborside Atrium, Harborside 2 and 3 at 34 Exchange Place. The J. Owen Grundy Pier is located near public transportation and there are numerous parking lots in the area. Food trucks will be on site.
ADMISSION: FREE, seating is on a first-come, first served basis
For more information, visit www.njcu.edu/arts.

Born in Cuba, jazz legend Paquito D’Rivera grew up listening to Benny Goodman recordings—in fact, it was these records that inspired his childhood dream of becoming a jazz musician in New York City. The winner of 14 GRAMMY Awards, D’Rivera has had an extraordinary career that spans jazz, Latin jazz and classical music. He is the recipient of the Living Jazz Legend Award from The Kennedy Center, the National Medal of the Arts from the United States, a Lifetime Achievement Award from Carnegie Hall, and an NEA Jazz Master from the National Endowment for the Arts.

Each September since 2013, the NJCU Alumni Jazz Big Band has brought together the University’s professional graduates with high-profile guests for a waterfront concert at Exchange Place. “This concert showcases the quality of our degree programs in jazz, and is a way for us to share this talent with the Jersey City community,” explained President Sue Henderson. “Just as Benny Goodman inspired Paquito D’Rivera, we see NJCU as a source of inspiration and learning for current and future generations of jazz musicians and audiences.”

The musical selections on this year’s program celebrate two anniversaries that are significant to the evolution of jazz as a quintessential part of American culture. In 1938, 80 years ago, the Benny Goodman Orchestra performed at Carnegie Hall, making a powerful statement with a racially integrated band on stage, and forever moving jazz from the dance floor to the concert hall. Radio station WBGO first aired in 1948 as the voice of the Newark Board of Education, and became a dedicated jazz outlet in 1979, 40 years ago. Since then, WBGO has become a seminal champion for jazz, creating an international platform for high-quality programming that encompasses a variety of styles and eras.

“There are many artists who would be an appropriate choice to salute WBGO,” said Amy Niles, CEO and President of the radio station, “but there isn’t anyone better than long-time Hudson Country resident Paquito. He exemplifies the spirit of WBGO with his outgoing joyful personality, his constant desire to improve, his quest to expand the boundaries of his music, and his passion for humanity. We are honored that NJCU has chosen to salute WBGO and our jazz family and has invited Paquito to participate.”

The NJCU Alumni Jazz Big Band brings together an impressive group of musicians and shares their talents with the Jersey City community. NJCU jazz alumni have credits in Broadway, television, recording industry, and symphony orchestras, and have worked with some of the most legendary artists of all time, including Gerry Mulligan, Ray Charles, Buddy Rich, Maynard Ferguson, Lionel Hampton, Johnny Mathis, Nancy Wilson, Cher, Mel Tormé, and Tony Bennett.

This is the sixth year the NJCU Alumni Jazz Big Band will present a waterfront concert on the J. Owen Grundy Pier. Previous concerts have been 100th Birthday Salute to Ella Fitzgerald, Dizzy Gillespie, Buddy Rich, and Thelonious Monk, with guest artists Jon Faddis and Cyrille Aimée; A Tribute to Lew Soloff of Blood Sweat &Tears with Randy Brecker; A Tribute to Clark Terry with special guest Wynton Marsalis; A Salute to the Other Jersey Boys with John Pizzarelli, Bucky Pizzarelli and Ed Laub; and A Celebration of the Inauguration of President Sue Henderson with trumpeter Jon Faddis.

These annual concerts are conducted by Professor Richard Lowenthal, who retired in June 2017 after 50 years at the University. Mr. Lowenthal founded the Jazz Program at NJCU, then Jersey City State College, in 1969. Under Professor Lowenthal’s leadership and continuing with Professors Ed Joffe, Walt Weiskopf, and Gabriel Alegria, NJCU boasts a strong jazz program on both the graduate and undergraduate levels.

ABOUT THE NJCU CENTER FOR THE ARTS

New Jersey City University (NJCU) Center for the Arts is the creative umbrella for the University’s public programs in the performing, visual, film, and literary arts. A cultural hub of metro-north Jersey, NJCU has strong arts departments, led by accomplished faculty, and presents an array of guest artists and speakers in addition to student performances.

The mission at New Jersey City University (NJCU) is to provide a diverse population with an excellent education. The University is committed to the improvement of the educational, intellectual, cultural, socioeconomic, and physical environment of the surrounding urban region and beyond.  Established in 1927 as a training school for teachers, today NJCU is among the most comprehensive universities in the state.  Located in Jersey City, NJ, and minutes from New York City, NJCU's fully accredited College of Arts and Sciences, Education, Professional Studies, and School of Business offer 43 undergraduate degree programs and 27 master’s programs and 2 doctoral programs, including emerging and interdisciplinary fields.