There, Nöel Coward’s English drawing room comedy, Blithe Spirit—last produced by The Shakespeare Theatre of New Jersey almost 20 years ago—is the perfect antidote to a rather contentious summer political silly season. Yes, holding a séance to conjure up ghosts may feel a bit creepy, but that it occurs in a “veddy” proper English country house marks the whole idea as “barmy.” 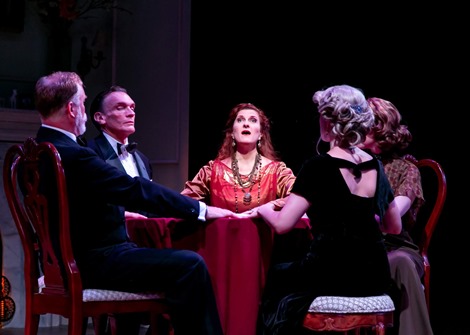 In this play, which borders on farce, an after-dinner seance runs amok when an eccentric medium manages to conjure up the ghost of a former wife—long since passed. When the ghost refuses to leave and decides she wants her husband back, despite the fact that he is happily remarried, chaos and confusion erupt and hilarity begins. (Above L-R: Ames Adamson, Brent Harris, Tina Stafford, Kate MacCluggage and Monette Magrath)

In her STNJ directorial debut, company veteran Victoria Mack shows she’s as adept behind the scenes as she is onstage. The action hums from the moment the lights go up; the talented cast moves around the stage with elegance and style and delivers Coward’s arch dialogue crisply and naturally—with very credible English accents. The pace holds until the penultimate scenes where too much talking and explanation almost sabotage the momentum; however, that’s Coward’s fault, not Mack’s.

The improbable action briskly unfolds in an English mansion’s elegant drawing room, complete with floral wallpaper and fireplace, designed by Charlie Calvert and atmospherically lit by Michael Gianitti (especially during the seance scenes). From the moment we walk into the theater, we are transported to the early 1940s, courtesy of sound designer Käri Berntson’s use of period music and Hugh Hanson’s elegant costumes.

Oozing elegance from every pore, Brent Harris is wonderful as Charles Condomine, the polished, sophisticated novelist reduced to babbling hysteria when stalked by the ghost of Elvira, his dead wife. Upon his first encounter with the specter, his impeccable comedic timing with a drink brings down the house, and merriment ensues as his responses to Elvira are misconstrued by Ruth, his real and present wife! Harboring no illusions about her husband, Kate MacCluggage’s Ruth above, with Harris) appears crisp and confident at first, but the reappearance of her rival

deliciously rattles her, especially since she cannot see or hear the other woman. Her feminine interest in the charms of her husband’s previous wife and their pre-dinner conversation about Elvira is probably the catalyst for the ghost’s return, and watching Ruth fall to pieces as Charles is succumbs to Elvira’s ghostly charm is quite funny. Susan Maris’s elusively fey Elvira (left) is both charming and wicked as she plots to reclaim Charles. Wearing a white gown and floating around the room, she projects the embodiment of a “blithe spirit,” not of this world and out to wreak havoc to get what she wants.

Rounding out the main trio, Tina Stafford (right) is superbly dotty as Madame Arcati, the eccentric medium who surprises even herself with her power to conjure the spirits of the dearly departed. This tour de force role gives Stafford a chance to parade her physical comedy chops, complete with magic mumbo-jumbo, marching and stretching exercises, trances and shaking tables, and she does not disappoint. Her comic facial expressions and general dottiness elicits hilarity from the audience whenever she takes the stage. The role fits her like a glove! Even her raffish attire telescopes the character’s eccentricities. However, Stafford tends to speak very quickly and often faces stage right, meaning that audience members on the opposite side of the auditorium may have trouble hearing all her dialogue. 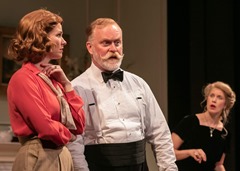 As Dr. and Mrs. Bradman, Ames Adamson and Monette Magrath (left, with MacCluggage) have less to do. In a rather restrained performance, Adamson isn’t quite as acerbic as one would expect for a self-described skeptic, Magrath is appropriately ditsy, formally calling her hosts “Mrs. and Mr. Condomine” and shaking hands with all the guests. Her nervous giggle and awkward demeanor suggest that she is out of her social league.

But Bethany Kay as the clumsy maid Edith nearly steals the show! From the opening scene when she appears to her final moments, she is a joy to watch. Saying not much more than “yess’m” and “yessir,” Kay relies solely on physical humor, especially the way she alternates between bustling around courting disaster and walking very slowly! Every time we hear a crash offstage, we prepare to laugh.

Nöel Coward, master of the drawing room comedy, purportedly wrote Blithe Spirit in one week during the London Blitz, when England was engaged in a life-and-death struggle with Hitler’s war machine. In his version of the genre, Coward sets out to show, as he said, that “death in the abstract is not nearly so solemn and lachrymose as many people would have us believe.” As people in those dark years learned that “it was all too easy to believe someone young and gay and kind was dead,” London audiences probably felt gratitude for the lighthearted relief offered by this ghost story. With its scintillating dialogue, technical skill and showmanship. Coward carries off his trickery with a jaunty air, which is more than half the fun.

It’s not without irony that we note the passing this week of Robin Leach, host of the popular 1980’s television show Lifestyles of the Rich and Famous. So, while Blithe Spirit might not give us much food for thought, we do get a chance to laugh at the foibles of the idle rich. The adjective “blithe” in its title suggests a “buoyant, cheery, gay, pleasant” way to spend an evening, which it is. Especially an evening in late summer!

Blithe Spirit runs through September 2 at the F.M. Kirby Shakespeare Theatre on the campus of Drew University, 36 Madison Ave., Madison. For tickets and performance information, call the box office at (201) 408-5600 or visit www.ShakespeareNJ.org online.