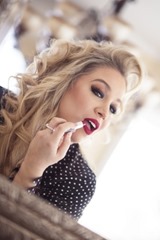 Eryn is the youngest-ever inductee into the NY/NJ Blues Hall of Fame, and her new EP Lady E has earned rave early coverage.

Much in the way Bruno Mars recalls the excitement of 1970s music, or Amy Winehouse took listeners on a journey back to the 1960s, or Meghan Trainor evokes a 1950s vibe, Eryn hopes to have Lady E transport listeners to another era. The EP delivers in a big way – starting with Eryn’s thrilling vocals and reinforcing them with a compelling range of songs, from the wit and catharsis of first single ‘Hallelujah You’re Gone’, to the understated storytelling of Stranger in my House, to the epic build of The You Missing From Me, written by Bon Jovi’s David Bryan, which rises to an anthemic high and is surely a centerpiece of the EP.

The pedigree on Eryn’s new EP is impressive. It was Produced and Mixed by Jack Daley (Lenny Kravitz, Joss Stone, Beyonce,) and Daley also played bass on the EP. Songwriting credits include ASCAP Award winner Cheryl DaVeiga & Anthony Krizan (Spin Doctors, Lenny Kravitz,) and the musicians are among the best in the business.

Born and raised in Maryland and now living in New Jersey, Eryn began singing professionally at the age of 13 and hasn’t looked back. She has performed with or opened for such luminaries as Buddy Guy, Dr. John, Greg Allman, Robert Cray, Don McLean, Johnny Winter, The Gin Blossoms, Bernard Purdie, The Little River Band and many others.   An award-winning emerging artist, Eryn has been described as a mixture of blues, soul, jazz, pop, rock and even country – but she prefers the term RetroPop, and the moniker is taking hold with her acclaimed new EP.

On Lady E and in concert, Eryn combines an old school sound that evokes the rhythms and recording techniques of the past with a modern pop mindset and powerhouse live performances.

“Celebrates personal independence, self-reliance, and hope for the future”