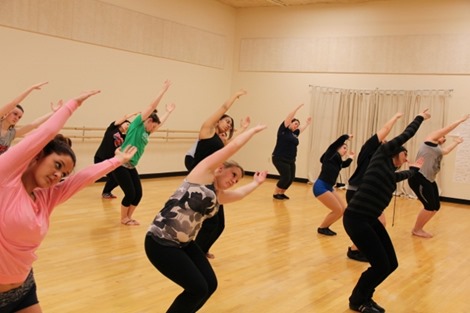 Centenary Stage Company, the not-for-profit professionally producing Equity Theatre in residency on the campus of Centenary University will hold a variety of educational opportunities during the fall of 2018. Continuing its tradition of cultivating a vibrant arts community, Centenary Stage Company will be offer the fall Conservatory of Dance, as well as, the Adult Acting Workshop.

Both programs are open to the public with registration deadlines of August 24, 2018.

For more information or to register for any fall workshop offerings call the Centenary Stage Company box office at (908) 979 – 0900 or visit centenarystageco.org. The box office is open Monday through Friday from 1 – 5PM and two hours prior to every event. The box office is located in the Lackland Performing Arts Center at 715 Grand Ave. Hackettstown, NJ on the campus of Centenary University.

The Conservatory of Dance is a community outreach program is offered to students age 14 through adult and provides the community with affordable, high-quality dance training on a collegiate level.

Ballet I is designed for the student who wishes to learn and work slowly on the fundamentals of classical ballet. Vocabulary will be broken down and emphasis will be placed on understanding proper placement, coordination, musicality and the joy of moving the body in space. Ballet II is designed for those students who have already completed Ballet I and have the technical skills to take the next ‘leap’ for more challenging movement.

Ballet I and II is taught by Erin Usawicz. Erin received her training with Jose Mateo and Mary McKenzie-Thompson as a scholarship student at Ballet Theatre of Boston’s (now called Jose Mateo’s Ballet Theater) Young Dancer’s Program. She served as the company’s apprentice and then advanced to a corps de ballet member. Other training included work with Finis Jhung at Broadway Dance Center in New York City as well as with Allegra Kent, famed Balanchine-era ballerina. Erin studied fashion design at Pratt Institute and photography at Rutgers’ Mason Gross School of the Arts where she earned a BFA with high honors.

A combination of different modern techniques for the beginner and intermediate dancer as well as those wishing to refresh their skills in modern dance. Modern I and II, will focus on breaking down vocabulary and emphasis will be placed on understanding proper placement, coordination, musicality and the joy of moving the body in space. Modern I and II is taught by Maureen Glennon Clayton. Maureen is a dancer, choreographer and dance educator.  Her choreography has been presented extensively throughout the tri-state area including DUMBO Dance Festival, Cool Wave NY Dance Festival, Gershwin Hotel, Merce Cunningham Studio, WaxWorks/University Settlement House, NJ Arts Collaborative/George Street Playhouse & Crossroads Theatre, Hatch Series/Jennifer Muller the Works Studio, The Field/Performance Zone, Soundance at the Barn, Cathedral Arts Festival, Movement Research/DTW studios, SWEAT Outdoors Dance Festival, Outlet Dance Project/Grounds for Sculpture, Garden State Dance Festival, Mix It Up Festival, American College Dance Festivals, National High School Dance Festivals, County College of Morris, Montclair State University, Mason Gross at Rutgers University, Centenary College and at A Taste of NY in Nicosia, Cyprus. She is also the founder of Moe-tion Dance Theater.

Tap I and II will focus on technique and terminology taught through rhythm exercises, short combinations of steps and across-the-floor work which is then put together into a longer combination. Also different styles of tap are introduced in this basic course. Tap I and II is taught by Jeff Foote. Jeff has been tap dancing for 11 years. He is a member of the NJ Tap Ensemble under the direction of Deborah Mitchell. Jeff has studied with tap greats such as Omar Edwards, Ted Levy, Dewitt Flemming, Jr., Karen Calloway Williams, and Savion Glover This summer, Jeff made is off-Broadway debut in Don't Bother Me, I Can't Cope at New York City Center. Jeff’s dynamic personality and talent enables him to motivate and encourage his students.

WHEN: Mondays from 6:00PM – 9:40PM beginning August 27 and running through December 10.
WHERE: Lackland Performing Arts Center’s Dance Studio at 715 Grand Ave. Hackettstown, NJ.
REGISTRATION: $250.00 per student.  Registration deadline is August 24.  The 2018 Fall Adult Acting Workshop will focus on contemporary and classical scene study and work will be partner focused. The actor will utilize both imagination and technique as they approach character and scene creation.

The class will be taught by Centenary Stage Company Artistic Director and Centenary University Fine Arts Department Chair, Carl Wallnau.  Recent acting credits include Dr. Watson in The Hound of the Baskervilles and Pandarus in Troilus and Cressida (Pennsylvania Shakespeare Festival), and Mr. Mayhew in Witness for the Prosecution (Bristol Riverside). He has directed numerous productions including the world premieres of Inventing Montana, The Tillie Project and The Poetry of Pizza as well as the American premiere of A Laughing Matter and the New Jersey premieres of Below The Belt, Square One, Rounding Third, Marvin's Room and The English Bride, which later transferred to NYC for a run at 59E59.  Wallnau has been cited for outstanding direction in productions of Springtime for Henry, Ladies Man and Quartermaine's Terms among others. He has worked at numerous regional theatres including Paper Mill Playhouse, The Arden Theatre, Second Stage in NYC, York Musical Theatre in NYC, People's Light, The Lark Theatre, The Pennsylvania Shakespeare Festival, Hartford Stage, Bristol Riverside, Forum Theatre, Premiere Stages, Orlando Shakespeare Company, Arts Center of Coastal Carolina, Foothills Playhouse, Theatre 1812 in Philadelphia, Barnstormers and 14 months on the road with the First National Tour of Titanic. Wallnau He received his MFA from Rutgers University Mason Gross School of the Arts and is married to his favorite actress Colleen Smith Wallnau for who he wrote the play Mary Todd... A Woman Apart.