REVIEW: “LINGER” @ PREMIERE STAGES WILL LINGER IN YOUR MIND LONG AFTER STAGE LIGHTS COME DOWN

Productions at Premiere Stages, in residence at Kean University, are consistently timely and thought-provoking. As their inaugural production of the 2018 season, Craig Garcia’s riveting drama, Linger, the winner of the 2018 Premiere Play Festival, raises the bar to a new level. Tautly plotted and superbly acted by a group of actors fully invested in their characters, the play’s themes and thorny questions will keep you on the edge of your seat and linger in conversation and thought long after the stage lights go down.

In Linger, Garcia pulls no punches when tackling modern problems—fulfilling family expectations, the corrosiveness of social media on teenage lives, and how we respond to calamity. James and Maryanne’s lives (right: Michael Frederic and Danielle Skraastad) are upended when their popular teenage son Mike is accused of an unthinkable, heinous crime involving a classmate. Declaring his son’s innocence from the get-go, James calls the news “senseless nonsense,” hires a criminal lawyer and gets Mike out of jail post-haste. Discovering a discrepancy in Mike’s story, Maryanne, a pediatrician, has doubts, which are given further credence when the victim comes to her medical office for an examination. The devastating fallout from this terrible event affects two families: James and Maryanne’s marriage fractures; bombarded by trolls on Instagram, their middle school-aged daughter Summer resorts to drastic action, and Mike is forced to confront his actions. And the victim and his father are forced to move to another town to start over anew. The play’s very title, Linger, conveys the reverberating effects of this momentous, monstrous incident. 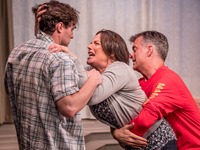 Harry Feiner’s scenic design, encompassing a suburban living room, a teenage boy’s room and Maryanne’s medical office, provides the perfect canvas upon which John J. Wooten directs this edgy play. He’s cast actors who literally “become” their characters. Michael Frederic (James) is superb as the earnest, if misguided, father, unable to believe that his only son would commit such an awful act. He steamrolls his wife and isn’t above blaming the victim to save Mike’s skin. He becomes the villain of the piece. Danielle Skraastad (Maryanne) is given to doubt, especially when she realizes that Mike has lied about the time he arrived home from the party. When, despite her better judgment, she agrees to see the victim (because she’s been his doctor since he was an infant), she puts herself in professional jeopardy, further adding to family discord. (Left: Haltiwanger, Skraastad and Frederic) 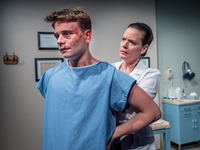 As Mike, Robby Haltiwanger attempts to deny his involvement in the crime while providing the audience with the feeling that he’s denying it too forcefully. He convincingly portrays a conflicted teenager who finds it difficult to live up to his parents’ expectations. That a dark secret might lurk beneath his teenage bravado is let slip subtly, hinted at by the victim, Bobby Williams (Will Ehren, right with Skraastad), whose emotional and physical pain are palpable and heartrending. 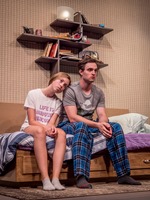 In the role of Summer, Sarah Kathryn Makl (left, with Haltiwanger) uses the mannerisms, voice and intonation to capture a middle schooler to a T; she sounded just like my 13-year-old granddaughter! Summer, of course, is the most vulnerable in the family; trolled on Instagram and Snapchat for defending her brother, she’s placed in a precarious emotional situation. And Jonathan C. Kaplan (below, right) is equally as fine as Bobby’s anguished father Gerald. Kept in check at first, his anger explodes like a grenade when he confronts Maryanne for destroying his family, followed by what can only be called a primal scream.

Kudos to Emily Auciello for her sound design. The Beach Boys’ Wouldn’t It Be Nice serves as the play’s theme song; a favorite of James and Maryanne’s since courtship, when sung by Mike it sounds more plaintive. And the atonal music played during scene changes heightens the play’s tension. Brant Thomas Murray has lit the production very atmospherically and Stefanie Genda’s costumes are appropriate to all characters.

The themes sensitively and affectingly explored in this raw, honest production are topical yet universal. Craig Garcia’s natural dialogue and John Wooten’s sensitive direction make this a play for parents and teenagers to see and discuss. Linger is one of the finest things I’ve seen in the more than two decades I’ve reviewed theater. Don’t miss it.

Linger will be performed at the Bauer Boucher Theater Center in Vaughn Eames Hall on the Kean University campus, 1000 Morris Ave., Union, through July 29. For information and tickets, call the box office at 908.737.7463 or visit www.premierestagesatkean.com online.