THE CHILDREN’S HOUR
by Lillian Hellman 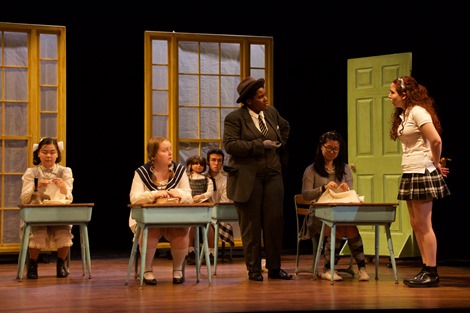 Princeton Summer Theater (PST) continues its 2018 season with The Children’s Hour. This fiery American classic by Lillian Hellman (The Little Foxes) depicts a world where rules are rigid, rumors fly faster than truth, and the hint of scandal is enough to bring two schoolteachers’ lives crashing down. 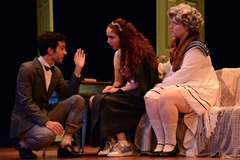 Director Maeli Goren’s take on The Children’s Hour is rooted in the deeply political context in which the play was written. In her director’s note she explains how “during the development of the play, Hitler came to power in Germany, the KKK continued its resurgence throughout the United States, and the tides of nationalism, racism, xenophobia, and homophobia rose steadily worldwide.” She finds the world of The Children’s Hour to be “obsessed with how to be good: how good people look, dress, grow up, speak, and love. It’s a world where goodness is a costume we put on, and the fabric can be easily torn by those around us. A familiar place where in order to guard our own goodness, we need to be able to point our fingers at the folks who are bad.” [Above left: Mary (E Harper Nora Jeremijenko-Conley, center) explains what she’s seen to Dr. Cardin (Evan Gedrich, left) and Mrs. Tilford (Maeve Brady, right).]

Company members Allison Spann, Maeve Brady,  E Nora Harper Jerimijenko Conley, Carol Lee, Lydia Watt, Rebecca Wei-Hsieh, and Chamari White-Mink will be returning to the stage in this production and will be joined by a new company member, Evan Gedrich.