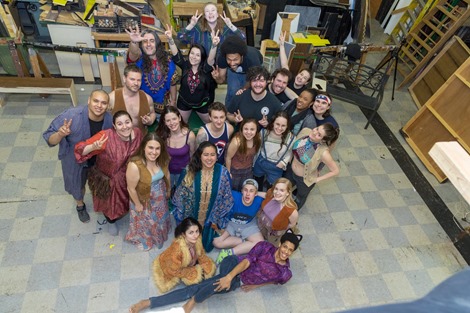 2018 marks the 50th anniversary of the show’s debut on Broadway, and its themes of rebellion, activism and speaking truth to power have never resonated with audiences more.

The show holds a special place in the hearts of company founders Dan Vissers, Shanna Levine-Phelps and Jon Mantes. It was a 2003 production of the show that brought them together and sparked the idea of forming their own theatre company. “We had all these ideas about what we would do if we had our own company,” says Dan Vissers, “and somewhere along the way those thoughts transformed themselves into a concrete plan for creating Pioneer. Hair is a dream production for us as it represents how far we’ve come. We’re not where we want to be yet, but we’re well on the road.”

The company has plans to present a series of classes for adult performers and some more intimate evenings of new works in the coming months. “Our tagline is ‘Groundbreaking theatre Past, Present & Future,” Co-founder Shanna Levine-Phelps adds, “that’s where our name comes from. We want to be part of creating a conversation.”

Creating a conversation is exactly what the company hopes to do with Hair. The production is designed to be immersive from the moment the audience enters the theatre. According to Vissers, “we wanted the audience to be part of the experience when they walked into the lobby, so they’ll see what people would have seen had they wandered through Central Park in 1968, kids with guitars and protest signs and flowers in their hair singing. By the time they take their seats they’ll feel like part of the tribe.”

Hair has a devoted following among the cast, many of whom have seen the show multiple times. Several of the actors have done the show before and claim that each time it has changed their lives. This is cast member, Ross Pohling’s, third time doing the show. He met his girlfriend, Evianna Hawkins in a prior production and now they are tribe members for Pioneer’s version. Cast member Leigh O’Neill saw the show 30 times in its last run on Broadway. As broke college students O’Neill says “my friends and I would go into the city at least once a week to try to win lotto tickets...obviously, I'm super excited to finally be a part of a tribe.”