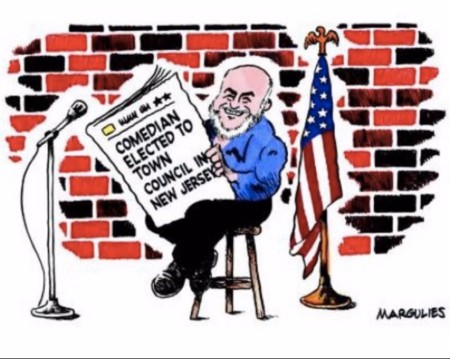 WHEN: Friday, August 3rd, at 9:15 pm and Saturday, August 4th at 6 pm.
WHERE: Jersey Fringe Festival in Hammonton
TICKETS: Tickets can be obtained through this link or by going to www.jerseyfringe.com.

In 2017 at the Capital Fringe Festival in Washington, DC, "COMEDIAN ELECTED TO TOWN COUNCIL IN NEW JERSEY” was nominated for Best Comedy Performance. This great review appeared in BroadwayWorld-DC.
Joey Novick returns home to the Garden State in August for two shows.

From BroadwayWorld-DC: “Comedian Elected to Town Council in New Jersey has heart, reminding us that public service can still be fun and honorable. That is why this reviewer is endorsing comedian Joey Novick.”

Jersey Fringe is a 3-day event featuring multiple theatrical productions at a variety of venues within walking distance of the central location and ticket hub, The Eagle Theatre. Multiple Producing Organizations will offer eclectic, unique selections for festivalgoers throughout the entire weekend.

“COMEDIAN ELECTED TO TOWN COUNCIL IN NEW JERSEY” is the story of Novick’s election to the Flemington Borough Council and journey in local politics in the Garden State.

“I started out in politics very jaded and cynical, and after fifteen years, have evolved into being passionate about public service, America, and the future of our very fragile democracy,” Novick continued.