This summers jazz series will feature two of the best swinging big bands you will ever hear and an outstanding quartet with an amazing vocalist. 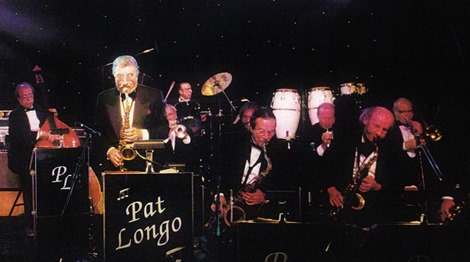 From playing Orchestra to the Marine Corps; Pat played clarinet and saxophone for the Second Marine Air Wing Band to playing for the Jimmy Dorsey Band and The Harry James Orchestra. Pat decided to start his own band in 1978 playing songs for HBO’s ‘The Sopranos’ episodes, the Academy Awards Governor’s Ball and many more.

The outstanding and internationally renowned vocalist, guitarist and composer Allan Harris sums up his personal perspective on music in clear and straightforward terms. “There is nothing that I have found that defines and gives credence to my place in this wild and mysterious universe than this thing called music.” Over the past 20 years, Harris has steadily developed his reputation as one of the finest vocalists of his era. In addition to his recordings, he has performed on a worldwide stage that has taken him to prestigious international festivals and halls in Europe, the Middle East and Asia, as well as the 2012 Olympics in London. At home, he has toured nationally at festivals and top venues, including New York’s Lincoln Center and D.C.’s Kennedy Center. He has received numerous awards, including the New York Nightlife Award for “Outstanding Jazz Vocalist” (which he won three times), the Backstage Bistro Award for “Ongoing Achievement in Jazz,” the Harlem Speaks “Jazz Museum of Harlem Award,” and the DownBeat Critic’s Poll Award for “Rising Star Vocalist.”

This swinging big band is comprised of outstanding musicians who have played under Basie, Ellington, Ray Charles, Frank Sinatra, Wynton Marsalis and so many others.

Tickets can be purchased easily from the convenience of your home online at www.RutherfurdHall.org and will be available locally in Hackettstown at Mama’s Café Baci & Panther Valley Pharmacy on June 1st.

Produced by Coyne Enterprises, Inc. in cooperation with Rutherfurd Hall and WRNJ Radio.