GUEST REVIEW: 'HAIR' is Joyous Blast from the Past from Centenary University’s NEXTstage Repertory 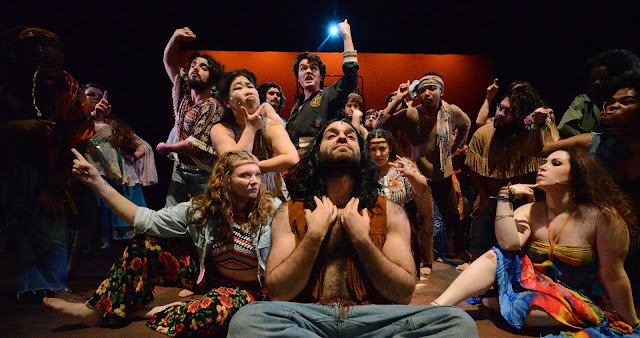 Unlike most rock musicals of today, the lyrics were understandable! It also means they shocked with words and actions never seen or heard before in an uptown theater, e.g., full cast nudity at the end of the first act, but omitted in this version. It was also ground breaking for the slim plot. Manhattan high schoolers and drop-outs are protesting the war and the universal military draft. Hatred of the war was exacerbated by the extensive nightly television coverage of the carnage in the jungles of Vietnam. The core of the plot is about Claude a pacifist  who unsuccessfully attempts to resist his draft notice.

Director/choreographer Lea Antolini-Lid has assembled a marvelous highly talented diverse cast of about 30 young people. Actually, with most of the cast on stage in spirited movement for the entire play, it might be more accurate to identify her as ‘ringmaster’ in place of ‘director.’ Regardless of the name, the multi-talented Lea Antolini-Lid has “mothered” an exciting, first class theater production equal to many now playing across the Hudson.

Hair is the creation of  Gerome Ragni and James Rado (book and lyrics) and music by Galt MacDermot. Three of the songs have become classics: Aquarius (the anthem of the entire national hippie movement),Let the Sunshine In, and Good Morning Starshine. 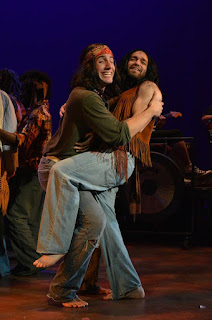 Not only did Ragni and Rado create Hair, they starred in the initial Off-Broadway run as Berger and Claude. In this production, Berger, the leader of the “tribe,” is impressively played by Brandon Conti. His opening First Act turn is a powerful audience grabber that sets the high energy tone for the rest of the play. The key role of Claude, the nice Polish boy from Queens who is about to be drafted, is played to perfection by Andy Martinez. He drips “sincerity.”

Other ‘spot on’ memorable performances are by: Megan Schmiedhauser (below, left) as Sheila, Berger’s girlfriend and roommate to the two boys. She is high energy blessed with a fine powerful voice. Standout songs are I Believe in Love, Easy to be Hard, and the classic Good Morning Starshine with Alyssa Ramsey; Jesse Bush is Woof, an over the top Mick Jagger fan; Julie Ullmann is the lovable Crissy; Nicole Boscarino is Jeanie; Brianna Javis is Ronny (wonderfulAquarius); Saquan Williams is Hud (has fun with Colored Spade). 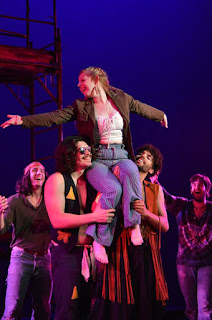 Special ‘tip of the hat’ to the outstanding musicians: keyboard and conductor Greg Paradis; guitar Rick Merino; Ben Weiss; bass Nate Lienhard; drums Justin Kemp. The band is positioned on the right side of the stage on a platform fully visible to the audience and via their exuberant playing become part of the show.