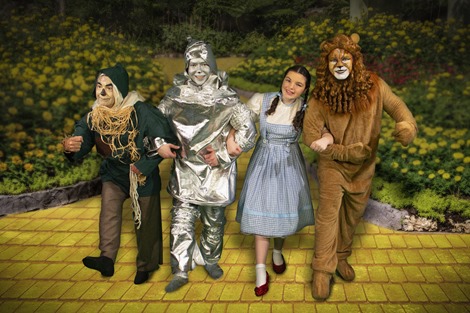 THE WIZARD OF OZ

WHEN: Friday, July 13, and Saturdays, July 14 and 21, at 8 p.m. Matinee performances are at 2 p.m. on Sunday, July 15, Saturday, July 21, and Sunday, July 22. A reception with the cast and crew follows the opening night show on July 13.
WHERE: MCCC’s West Windsor Campus, 1200 Old Trenton Road, West Windsor
TICKETS: $20 for adults; $18 for seniors; and $16 for students/children.
Tickets may be purchased online at www.kelseytheatre.net or by calling the Kelsey Box Office at 609-570-3333. Kelsey Theatre is wheelchair accessible, with free parking next to the theater.
For a list of upcoming events, visit the Kelsey website or call the box office.

The whole family will be off to see the Wizard as The Yardley Players present the The Wizard of Oz at Mercer County Community College’s (MCCC’s) Kelsey Theatre. [TOP, from left, the Scarecrow (Tom Chiola), Tinman (Marc Suznovich), Dorothy (Shealyn Davis), and the Cowardly Lion (Brian Davis)]

Audience members will be transported over the rainbow, along with Dorothy Gale of Kansas, to the Land of Oz, where she joins The Scarecrow, The Tinman, and The Cowardly Lion on the adventure of a lifetime. It’s a quest through a magical landscape, filled with munchkins and monkeys, a good witch – and a very bad witch! Will they make it to the Emerald City, avoid the wrath of the Wicked Witch of the West, and convince the Wizard to help them achieve their hearts’ desires? This faithful adaptation of the 1939 film classic features beloved Oscar-winning songs including “Somewhere Over the Rainbow” and “We’re Off To See The Wizard,” along with favorite characters and a few fun surprises along the way. 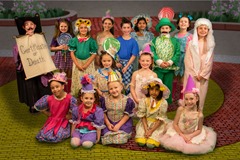