WHEN: Saturday, June 16, 11 AM – 5 PM
WHERE: The Wellmont Theater, 5 Seymour Street,  Montclair, NJ.
TICKETS: Tickets are available at www.ticketmaster.com or at the box office. Check out the Facebook event page here.

The Aquarian Weekly  in partnership with Weird NJ are pleased to announce special additions to The StrangeXchange. The Amazing Kreskin, the stars from Oddities television show, and Karnevil Sideshow will join over 40 vendors and food trucks.

The Amazing Kreskin is best known for being a mentalist or mind reader for the past six decades. Kreskin also had his own television series, a board game and a movie based on his abilities. He will sell merchandise and sign books for fans at the event.

Oddities TV show ran for five seasons on the Discovery Channel and followed the owners of Obscura Antiques and Oddities shop in New York City. Employees scoured flea markets plus private collections in search of the most unusual items for their clients and store.

The Karnevil sideshow was founded in 2012 and has been touring their vaudeville act across the country since. Their latest stop is The StrangeXchange stage. 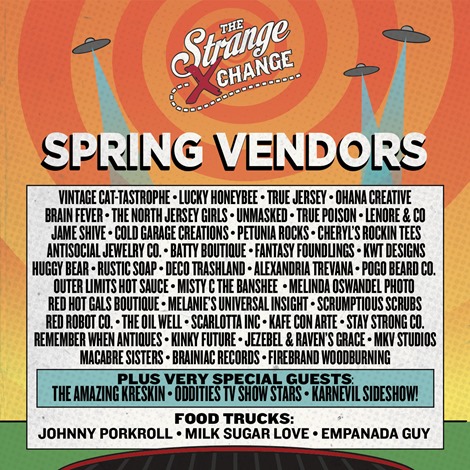 The Aquarian Weekly was founded in 1969 and is one of the last independently owned alternative weekly print and online publications still running today.

Weird NJ started as a newsletter in 1989 and serves as a travel guide to New Jersey's local legends and best kept secrets.