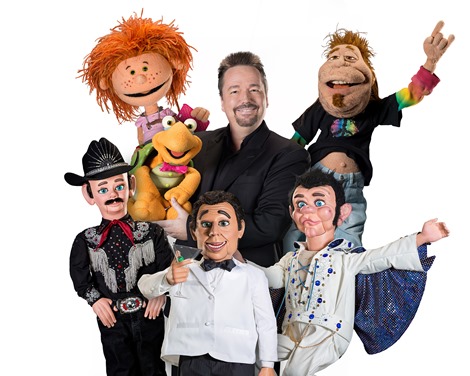 WHEN: Friday, June 22, 2018, 8pm
WHERE: State Theatre New Jersey, 15 Livingston Ave., New Brunswick
TICKETS: $39-$89
For tickets, more information, or group discounts, call State Theatre Guest Services at 732-246-SHOW (7469), or visit us online at www.STNJ.org.
State Theatre Guest Services, located at 15 Livingston Ave, New Brunswick NJ, is open Monday through Friday from 10am to 6pm; Saturday from 1pm to 5pm; and at least three hours prior to curtain on performance dates unless otherwise specified. Additional ticket and transaction fees may apply.

Best known for his victory on America’s Got Talent in 2007, Terry Fator captured the hearts and tickled the funny bones of America with his unique combination of celebrity impressions and his unparalleled voice. Fator returns to the State Theatre with his all-star team of anything-but-ordinary puppets including Winston, the Impersonating Turtle; Emma Taylor, the little girl with the big voice; Maynard Thompkins, the Elvis Impersonator; and Duggie Scott Walker, the annoying neighbor.

In 2007, after turning down a chance to compete on the first season of NBC’s America’s Got Talent, Fators fans wrote the show saying they just had to have Fator on. Producers called Fator and invited him to audition. After seeing, and liking, Season 1 of the show, Fator went for it, and became the America's Got Talent Season 2 champ, taking home the $1 million prize and title of “Best New Act in America.”

It wasn't long before Sin City would recognize Fator as the headlining act he was destined to be. In 2007, he signed a $1.5 million deal to perform at the Las Vegas Hilton. The following year Fator signed what has been described as “one of the largest entertainment deals in Las Vegas history” to headline his own show, “Terry Fator: The VOICE of Entertainment,” at The Mirage Hotel & Casino.

Fator's story began long before America's Got Talent. His first taste of entertainment came at age eight when he tried his hand at magic with the help of a hypnosis book. "I unsuccessfully tried to hypnotize my friends, but then in fifth grade I found a book on ventriloquism and that came pretty quickly for me. I was always fascinated with all forms of entertainment, but especially magic and puppets. But other kids in school were doing magic, and I wanted to be original, so ventriloquism became my thing," says Fator.

Today, Fator impersonates more voices than he can count with the help of more than a dozen characters singing everything from Nat King Cole, Garth Brooks, Roy Orbison, Dean Martin, Elvis, Louis Armstrong, Bruno Mars, and many more.

Fator finally has that audience of millions who enjoy his work through his sold-out and award-winning live show, multi-platinum selling DVDs (his debut DVD, Terry Fator: Las Vegas charted four times platinum), and numerous memorable television appearances. The industry has certified him a bona fide superstar, as well, with Simon Cowell declaring Fator to be “one of the best entertainers in the world” and The Best of Las Vegas Awards honoring Fator with awards for Best Show, Best All-Around Performer, Best Impersonator, and Best Overall Show.