What with bad weather, illness and personal travel, I hadn’t gotten to review any of Two River Theater’s productions of the 2017-2018 season. Thus, it was with great anticipation that I trekked down to Red Bank to catch their final offering, Songbird. Unfortunately, I was disappointed, for instead of a penetrating and clear-sighted mirror of Nashville music society, the play is more a string of individual musical numbers than a play with music.

Following the basic plot outline of Anton Chekhov’s play, The Seagull, this new musical by Michael Kimmel, with music and lyrics by Lauren Pritchard, is a tiresome mess that, despite its energetic performances, remains uninvolving. There’s so much singing that after 45 minutes, I wondered when the dramatic action would begin; a substantial conversation lasting longer than 10 words didn’t occur until an hour into the performance. The rest was filled with often smart-mouthed chitchat and lots of country songs—18 in all—none of them furthering the plot line. 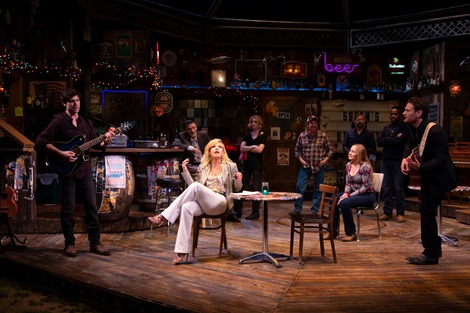 Songbird is the tale of famous country singer Tammy Tripp, who has returned fresh off a national tour to the Nashville bar and music venue owned by her brother Soren and managed by her best friend Pauline and her husband Samuel to hear her son Dean debut his song. Tammy brings along her much-younger songwriter boyfriend Beck, who turns the head of Dean’s girlfriend Mia. When she runs away with Beck, Dean attempts suicide by hanging, bringing Tammy home again to indulge in some lukewarm mothering. Ultimately, though, Mia reappears, rejects Dean’s heartfelt protestations of love and declares her continuing feelings for Beck, causing Dean to leave the bar and step in front of an oncoming tractor trailer. (above: Felicia Finley, center, as Tammy Trip, with the Company) 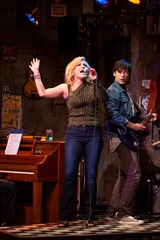 Country music’s preoccupation with themes of unrequited love, jilting, nostalgia for the place one couldn’t leave fast enough would seem perfect for Chekhov’s 1895 comedy with its focus on the romantic and artistic conflicts between four characters. Indeed, Kimmel does create Nashville counterparts for Chekhov’s central characters, the famous middlebrow story writer Boris Trigorin (Beck), the ingenue Nina (Mia), the fading actress Irina Arkadina (Tammy Tripp), and her son, the symbolist playwright Konstantin Tréplev (Dean, right with Tripp). Chekhov’s eponymous seagull becomes a bluebird, a symbol of happiness in many cultures, that Dean kills with his truck.

But compressing Chekhov’s four acts into two and making room for the show’s songs often results in caricatures rather than three-dimensional characters. Tammy (Felicia Finley) is a narcissistic country-pop star, more interested in her career than motherhood and determined to hang onto her young lover Beck. What gets lost in Finley’s portrayal is that Tammy’s star is fading; her single reference to smaller venues and crowds is tossed off so casually that it’s easily missed. She flounces around the bar, throwing her fame in everyone’s face (especially that of her former bandmate Pauline) and commenting very loudly and dismissively of her son’s musical effort. It’s very hard to work up any sympathy for her. 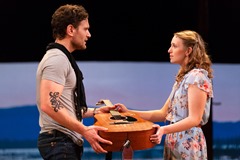 Eric William Morris’s Beck garners a bit more sympathy, at least until the penultimate scene when Mia reveals a hard truth about their relationship. He longs to write better songs, not just fluff like “Highway Fantasy” for the masses. He’s flattered by the ingenue’s attention and lets himself be seduced by it; but he pragmatically throws his lot in with Tammy and the fame that comes with that relationship. As the ingénue Mia, Ephie Aardema (left, with Morris) is winsome at first, but becomes cruelly calculating when a better gig than singing Dean’s new wave music (the sappy “Wandering”) comes along. Sheltered by her Baptist parents, she’s easily snowed by Beck’s interest in furthering her career. Of all the female characters, Aardema’s Mia feels the most genuine and poignant. 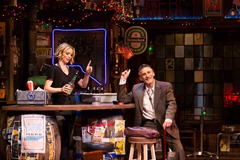 Hiding her vulnerability with zingers and booze, Kacie Sheik’s sulky Missy (right, with Bob Stillman as Soren) ably navigates the most complex romantic triangle in the play. Besotted with Dean, who rejects her, she in turn rejects Dean’s best buddy Rip, eventually marrying him for convenience before realizing his true worth. Her snappy repartée garners lots of laughs, even as it hides her pain. Wearing his pain on his chest, Dean (Marrick Smith) mopes around most of the time; his annoying character is so busy chasing Mia that he fails to engage in life, eventually taking his when things don’t work out. 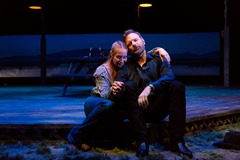 Pauline and Doc (Kelly Karbacz and Drew McVety, left) are more likeable, even though she’s cheating on the amiable if dim Samuel (Andy Taylor). And Bob Stillman as Soren lends gravity to the proceedings, especially because his mortality is evident from the first cigarette he lights up to the final one that almost does him in.

Despite the script, the cast is to be commended for its musical chops. Everyone sings and plays an instrument, pulling one off a wall or a stand whenever the need to warble arises. The music, a mix of folk, bluegrass and pop-country, is generally rousing; however, I found myself wishing for more quiet interludes. But the talented cast performs the catchy lyrics naturally, in addition to performing Marc Kimelman’s nifty choreography very well. Director Gaye Taylor Upchurch keeps the action humming along, sometimes a bit too quickly so that the nuanced themes are glossed over and feel unimportant.

If you like country music, you’ll like Songbird. With songs often performed for the heck of it, however, you might feel shortchanged, and if you seek character development, you won’t find much. Had I not been told that Songbird was and updated country version of The Seagull, I might have enjoyed the production better. True to Two River Theater’s reputation, the production values are terrific and the performances superb, even if the material isn’t quite the same character.

Songbird will be performed at Two River Theater, 21 Bridge Avenue, Red Bank, through July 1. For information and tickets, call the box office at 732.345.1400 or visit www.tworivertheater.org online.