WHEN: June 21st - July 8th every Thursday-Saturday at 8pm, Saturdays & Sundays at 2pm, and select Wednesdays at 8pm. A talkback will occur after the evening performances on Friday, June 22nd, June 29thand July 6thwith the director, cast and creative team.
WHERE: Hamilton Murray Theater, Princeton University, Princeton
TICKETS: $29.50 for general admission, $24.50 for students and matinees. We also offer season subscriptions for only $79 (over a 30% discount!), which ensures a reserved seat for all four of our main stage shows this season.
To order tickets, visit http://www.princetonsummertheater.org/tickets or call the PST box office at 1-732-997-0205. 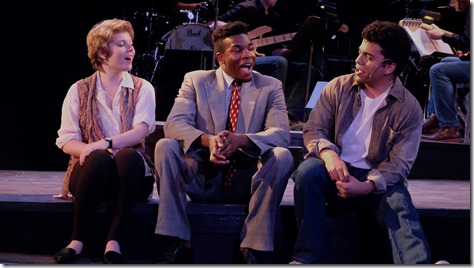 Princeton Summer Theater (PST) is proud to open its 2018 season with Jonathan Larson’s autobiographical rock musical, Tick, Tick…Boom! Fueled by a brilliant rock and pop score, this intimate show pulls back the curtain on the man whose breakthrough would change American musical theater forever in an inspiring appeal to follow your dreams. Director Victoria Davidjohn sets the show as a “story of life before success, and a reminder of what the combination of hard work, determination, and a dream can accomplish.” [Above: Susan (Allison Spann, Left) Michael (Chibueze Ihuoma, Center) and Jon (Isaac Piecuch, Right) sing “Louder Than Words” the show’s closing number.]

This production sets the stage for a summer of performances that center around self-discovery as seen through critical turning points in our characters' lives. Whether facing graduation, an unexpected diagnosis, middle age, or a scandal, the challenges these characters face test them and help each one find out what truly matters. With four brilliant takes on responding to adversity and change, these plays push us to closely examine our lives, to dream big, and to fight for those we care about.

Victoria Davidjohn (Director)is thrilled to be directing Princeton Summer Theater’s opening show, Tick Tick... Boom!A director and lighting designer who focuses on amplifying unheard voices, reworking classic works for contemporary audiences, and nurturing new pieces of theater, she is pursuing a B.A. in English Literature with certificates in Theater and Music Theater at Princeton University. President of Princeton University Players (a student run musical theater group) she also serves as the Music Theater representative to the Lewis Center of the Arts Advisory Board. Past directing credits include In the Heights, Evita, The Way You Move, Breathing Corpses, and The Bacchae.

Isaac Piecuch (Jon)is extremely excited to be a part of  Princeton Summer Theater’s production of Tick, Tick...Boom!A graduating senior from Princeton University, Isaac studied History, but was heavily involved in Musical Theater. Some of his previous roles include Chip in The 25th Annual Putnam County Spelling Bee and Seaweed in Hairspray. Isaac also enjoys playing baseball and singing a cappella music. He would like to thank his family for supporting him throughout his time as Princeton, as well as Musical Director Vince di Mura for letting him know about this opportunity.

Chibueze Ihuoma (Michael)NYU ‘21 is thrilled to make his debut at Princeton Summer Theater! An alum of The Lawrenceville School in Mercer County, he starred in its productions of  Rodgers and Hammerstein’s Cinderella (Prince Topher) and  The Mystery of Edwin Drood (John Jasper), as well as  Degas, C’est Moi (Ed) and  The Secret Garden(Ensemble). He is currently pursuing his BFA in Drama at NYU Tisch School of the Arts in the New Studio on Broadway and performs with NYU’s all-male acapella group, Mass Transit. Chibueze thanks his friends, family, and teachers for supporting him throughout his artistic journey.

All photos taken by Sarah Golobish