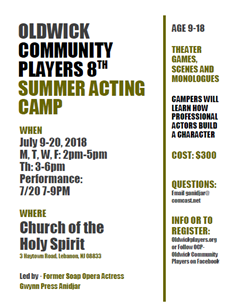 WHEN: July 9 to 20, 2018; Mondays, Tuesdays, Wednesdays, and Fridays from 2PM to 5PM and Thursdays from 3PM to 6PM. There will be a performance on July 20 at 7PM at the church.
WHERE: Church of the Holy Spirit, 3 Haytown Road, Lebanon, New Jersey
TUITION: $300. Included in the cost of the workshop will be a professional headshot, dinner on the Friday night of the performance, and a 2018 OCP membership. For kids ages 9 to 18
There are a limited number of spots available. The deadline to register is June 25. For questions about the workshop, email ganidjar@comcast.net. To register, visit www.oldwickplayers.org.

The camp is designed to develop creativity, focus, collaboration, and confidence on and off stage. Combining theater games, script exploration, monologues and scenes from plays and films, students will learn how professional actors build a character. At the culmination of the two weeks, they will get to demonstrate what they have learned by performing their scene or monologue on the stage in front of an audience of family and friends.

This year’s workshop will be run by former soap opera actress Gwynn Press Anidjar. Gwynn was a regular on the long-running ABC daytime drama, The Edge of Night.

Gwynn has appeared in more than 10 feature films, and has been directed by such luminaries as Bob Fosse, Jonathan Demme, and Paul Mazursky. In theater, she performed Off- and Off-Off Broadway in classics to contemporary works. In addition, she served as Creative Coordinator on the syndicated television series, Monsters, and was Assistant to the Producer on the films Ironweed and Hamburger Hill.

Gwynn was one of a select group of students who had the opportunity to train with renowned acting teacher Uta Hagen in New York City. Gwynn taught acting previously for Encore Music Studio and Franklin Theater Works. She assisted at OCP’s 2016 Summer Acting Workshop and performed in OCP’s Staged Reading of Belles (above).