Hair styles may change, hemlines may fluctuate, but one thing never goes out of fashion: hypocrisy. And as hypocrites go, none is more outrageous than the imposter who wears a mask of righteousness to disguise carnal appetites.

Proof of the vice’s immutability is delightfully evident in Molière’s 1664 scathing attack on hypocrisy and hollow morality, Tartuffe, currently onstage at the Shakespeare Theatre of New Jersey in Madison. Banned by Louis XIV and vilified by the conservative church after its first performance, Tartuffe quickly became a runaway hit and has delighted audiences for over three centuries.

Be it morally flawed televangelists (think Jimmy Swaggart), religious conservatives admitting to sexual indiscretions while decrying the decadence of modern society or draping the breast of the statue of Justice so it won’t be visible while the Attorney General is giving a speech, it’s comforting to know that hypocrisy is alive and well in America.

Pretending to be a pious religious devotee, the pauper Tartuffe manages to worm his way into a wealthy bourgeois family, completely snookering credulous patriarch Orgon and his overbearing mother Madame Pernell—while disguising his own sexual appetites (left, Brent Harris and Patrick Toon). That Tartuffe is a conniving swindler is apparent to the entire household—from lowly maid to Orgon’s wife and children. The conflict arises when Orgon decides to marry off his daughter Marianne to Tartuffe and signS over his entire fortune and holdings to Tartuffe as his sole heir. Certain of his power over his benefactor, Tartuffe attempts to seduce Orgon’s wife Elmire, and when Orgon believes his protégé’s denials, she hatches a scheme to unmask the charlatan and set things right. And because this is a comedy, all ends well, with Tartuffe in jail, Elmire’s honor intact and Marianne wed to her chosen beau. 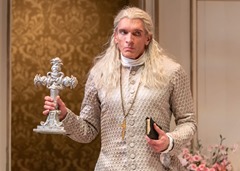 Molière’s appellation, “master of French comedy,” is fully evident in this production, deliciously translated from the French by Richard Wilbur. Once again, Bonnie J. Monte’s expert directorial hand is evident as the action on a lovely period set designed by Brittany Vasta and lit by Matthew J. Weisgable moves at a steady pace. She’s aided in this endeavor by a talented troupe of actors. Brent Harris’s Tartuffe (above) is a shameless, smarmy, sleazy hypocrite who continually makes the sign of the cross, sneaks a sweet into his mouth and swigs wine while his benefactor is not looking. As Orgon, Patrick Toon is an appropriately duped doofus, a man who constantly asks, “And Tartuffe?” instead of worrying about his wife’s predicament.

William Sturdevant (right, with Toon) as Orgon’s brother-in-law Cléante commands the stage whenever he appears; with his sonorous voice, he’s the mouthpiece for Molière’s contention that science/reason trumps piety/faith, an argument central to the Age of Reason, which this play presages. And Aaron McDaniel is an absolute stitch as Orgon’s hot-headed son Damis, given to leaping in the air, prancing about the stage and jumping up and down in rage at Tartuffe’s heavy-handed sway over his father.

On the distaff side, Caroline Kinsolving is wonderful as Orgon’s elegant, wise young wife Elmire, who sets up the scheme that eventually unmasks Tartuffe. She’s very funny, especially in the scene where she permits Tartuffe to seduce her to reveal his true nature to her 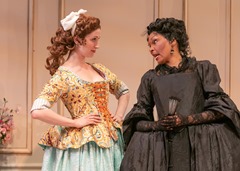 husband, who is hiding under a table. Vivian Reed (left, with Victoria Mack) is equally as terrific as the quintessential control-freak battle-ax of a mother-in-law/grandmother, Madame Pernell, who continues to extol Tartuffe’s virtues even when everyone else is disenchanted with him. Her frank and obnoxious assessment of her son, his wife and her grandchildren that opens the play is hilarious.

Sarah Nicole Deaver (below right) is ditsy as Orgon’s timid daughter Mariane, whose marriage plans to Valère (Mark Hawkins with a very expressive face) are upended when she unwittingly pledges allegiance to her father’s wishes. And Victoria Mack (below right, center) is splendid as the saucy, smart-mouthed maid Dorine, who can’t keep her opinions to herself even when her master threatens her life. Sticking her nose into everyone’s business, she nearly steals the opening scene from Vivian Reed! 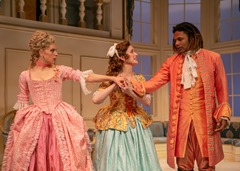 Costumes by Nikki Delhomme (right, Deaver, Mack and Hawkins) are lavish and appropriate to the 17th century. The women’s wide hoop skirts provide a shelf on which to rest their elbows! And Tartuffe’s priestly “dress” of lush gilt and white brocade and his long, white hair telegraph his duplicitous nature. Bonnie Monte’s sound design includes period music to set the scene.

It’s said, “The more things change, the more they stay the same,” an axiom more accurately applied to humankind’s vices than to its virtues. Attacking such vices through comedy makes the encounter all the sweeter and sharper. It takes a genius like Molière—and his predecessor Shakespeare—to write comic, satirical plays that cross a gulf of three and a half centuries to make us confront our own modern failings. And it takes a talented troupe of actors like those at the Shakespeare Theatre of New Jersey to drive the message home in an entertaining way.

So, if the last time you read Tartuffe was in a college French class, this is the perfect time to renew your acquaintance with this comic masterpiece. And if you’ve never seen or read the play, this superb production will whet your appetite for more of his works.

Tartuffe will be performed through June 3. For information and tickets, call the box office at 973.408.5600 or online at www.ShakespeareNJ.org.