Laugh-Out-Loud Tribute to Wild ’70s in “Disaster! A Musical,” Coming to MCCC’s Kelsey Theatre June 8 to 17 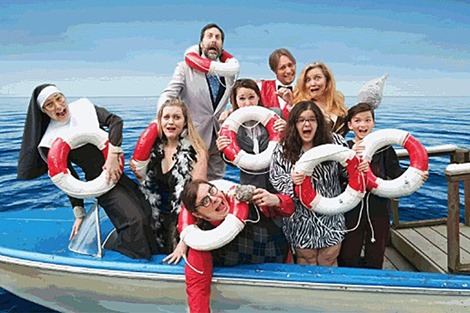 WHEN: Fridays, June 8 and 15 at 8 p.m.; Saturdays, June 9 and June 16 at 8 p.m.; and Sundays, June 10 and 17 at 2 p.m. A reception with the cast and crew follows the opening night performance on June 8.
WHERE: Kelsey Theatre located on the college’s West Windsor Campus, 1200 Old Trenton Road.
TICKETS: $18 for seniors; and $16 for students/children.
Tickets may be purchased online at www.kelseytheatre.net or by calling the Kelsey Box Office at 609-570-3333. Kelsey Theatre is wheelchair accessible, with free parking next to the theater. For a complete listing of adult and children’s events, visit the Kelsey website or call the box office for a brochure

Audiences can relive – or discover for the first time – an era at the movies that brought disaster at every turn. When a group of New Yorkers attends the opening of a floating casino and disco, chaos ensues in the form of multiple calamities that harken back to such films as “Earthquake,” “The Swarm,” and “The Poseidon Adventure.” The parody is full-on ’70s, adorned by cringe worthy fashions like platform shoes and bell bottoms, and set to the beat of hit songs such as "Hooked on a Feeling," "Sky High," "I Am Woman" and "Hot Stuff." Written by Seth Rudetsky and Jack Plotnick, the show had a 2016 run on Broadway that included a Tony Award nomination. (Above: Chris Schmalbach, front; middle row, from left, Haley Schmalbach, Ally Masson, Jennifer Fischer, Dana Cavagnaro, and Nicholas Benedetti; back row, Joe Zedeny, Jim Petro and Jennifer Winn)

The ensemble cast features Chris Schmalbach of Palmyra as Ted, Haley Schmalbach of Palmyra as Sister Mary, Jennifer Fischer of Hamilton as Marianne, Jennifer Winn of Ewing as Jackie, Jim Petro of Hamilton as Chad, Joe Zedeny of East Windsor as Tony, Connor McDowell of Levittown, Pa., as Scott, Jeffrey Milstein of East Windsor as Maury, Joseph Stockette as Langhorne, Pa., as Jake, Nicholas Benedetti of Ewing as Ben/Lisa, Ally Masson of Levittown, Pa., as Levora, and Gina Migliaccio of Hamilton as Shirley. Playing multiple roles are Mike Wemer of Mt. Holly and Dana Cavagnaro of Hillsborough. (Among these roles are workmen, chef, waitress, taxi driver, wealthy couple, blinded woman, victims and passengers.)