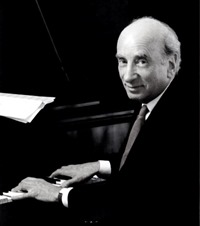 The virtuoso jazz pianist Dick Hyman features his interpretations of popular songs from Tchaikovsky’s “The Nutcracker” written in 1892 to Stephen Sondheim’s “Losing My Mind” from the 1971 musical Follies. Some of the other selections to be performed are the Lennon-McCartney hit “Norwegian Wood,” the popular standard “Stella by Starlight,” and “I Feel Pretty” in celebration of the 100th birthday of Leonard Bernstein. Mr. Hyman also promises to perform his tour-de-force version of Fats Waller’s “Minor Drag.”

Since beginning his career in the early 1950s, Dick Hyman has developed a critically-acclaimed reputation as a versatile pianist, organist, arranger, music director, and composer. He has made countless concert appearances all over the world, written film scores and orchestral works, and recorded more than 100 albums under his own name.

In addition to his concerts, Mr. Hyman has had a prolific career as a studio musician. He won seven Most Valuable Player Awards from the National Academy of Recording Arts and Sciences and won Emmy Awards for his original score for “Sunshine’s on the Way” and for musical direction of a PBS special on Eubie Blake. He served as pianist/composer/arranger for a dozen Woody Allen films and wrote scores for Moonstruck, Scott Joplin, The Lemon Sisters and Alan and Naomi.

Born in New York City in 1927, Dick Hyman was classically trained but it was an introduction to the music of Bix Beiderbecke, Louis Armstrong and others that led him to become a jazz musician. He served as the artistic director for the famous Jazz in July series at New York’s 92nd Street Y and was inducted into the Jazz Hall of Fame in the mid-nineties. Most recently, he was named a National Endowment for the Arts Jazz Master in 2017.