WHEN: Friday, May 4th, through Saturday, May 19th, Friday and Saturday evening performances begin at 7:30pm, and the Sunday matinees begins at 4:00pm.
WHERE: Baird Theatre on Three, 5 Mead St., South Orange
TICKETS: Online tickets are discounted at $22-$28 for Adults and $17-$23 for Seniors/Students at interactproductions.tix.com. All tickets purchased at the box office in person are $30, and are available starting an hour before curtain. Online ticket sales end two hours prior to curtain time.

In Legally Blonde The Musical, Elle Woods appears to have it all. Her life is turned upside down, however, when her boyfriend dumps her so he can start getting serious about his life and attend Harvard Law. Determined to get him back, Elle uses her charm to get into Harvard Law. At school, she struggles with peers, professors and Warner Huntington. With the help of Paulette and Emmett, though, Elle quickly realizes her potential and sets out to prove herself to the world.

The show has music and lyrics by Laurence O’Keefe and Nell Benjamin, book by Heather Hach, and was based on the novel by Amanda Brown and the 2001 Golden Globe-nominated MGM movie starring Reese Witherspoon. The Broadway hit and Tony-nominated musical starred Laura Bell Bundy in 2007. 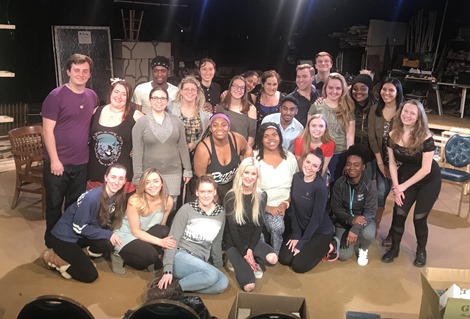 Founded in 2009, interACT has been bringing theater to the community for nine seasons. Next on their slate is the summer fundraiser show "interACT Sings!"