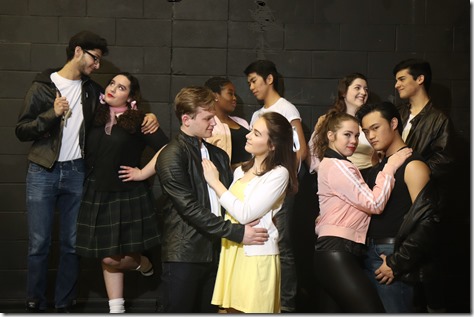 GREASE
Book, Music and Lyrics by Jim Jacobs and Warren Casey
James Mosser is director and musical director
Jennifer Williams is the choreographer

WHEN: May 4, 5, 10, 11, 12, 17 18 and 19 at 8:00pm and May 12, 13 and 19 at 3pm
WHERE: Chatham Playhouse, 23 North Passaic Avenue, in Chatham
TICKETS: $25 for adults and $23 for youth/senior
Tickets can be purchased at our Box Office or Online. To access the theater’s new online ticketing service, where you can now reserve your particular seat, simply go to ccp.booktix.com. The service is available 24 hours a day, and tickets can be purchased online up until three hours prior to curtain on the day of a performance.
For information regarding box office hours, please call the box office number listed above. Patrons with special needs requiring seating accommodations should contact the Playhouse at least 24 hours prior to the performance. Without prior notice, accommodations cannot be guaranteed.

Get out your leather jackets and pull on your bobby socks! It’s time to join Rydell High’s senior class of 1959! Grease follows love-struck bad boy Danny and girl-next-door Sandy in a thrilling injection of pure fun with astounding dancing and amazing songs. It’s the beloved rock n’ roll celebration of teen angst, fast cars and first loves – all set in the fabulous fifties. This smash show is celebrating the 40th Anniversary of the film release, and features the irresistible songs from the Tony Award-Nominated Broadway Show and hit movie, including “You’re the One That I Want,” “Grease is the Word,” “Summer Nights,” “Greased Lightnin” and more!

James Mosser and Jennifer Williams currently work at Union High School, one of the top training programs for theater students in the state of New Jersey.  The UHSPAC has been nominated for over 126 prestigious Paper Mill Rising Star Awards, an event that recognizes excellence in high school theater, similar to the Tony Awards. They have won 31 awards and currently hold the record for the most wins ever won by a single show for their 2015 production of Duke Ellington’s Sophisticated Ladies winning 9 awards.  This past March, the UHSPAC was awarded a $10,000 grant from NBC and their new TV Drama Rise, a show about a high school theatre department.  The UHSPAC was selected as the only school to receive a sneak preview of the show's premiere and were treated to a special visit from the show's stars. They were featured in various online publications including People Magazine. Previous, Mosser and Williams directed and choreographed respectively Chatham Players’ 2016 production of Monty Python’s Spamalot, for which they were both nominated for NJACT Perry Awards.

Producer Lukasik said, “Grease is the iconic musical that celebrates how the Fifties and the musicians of the time help changed the culture of America. The Fifties were also the beginnings of an era when teenagers controlled the music that they bought and listened to. Much was changing! Grease puts in front of us teenage relationships, rebellion, social structure, gang violence and peer pressure. It reminds many of us of the struggle of the age of adolescence. Grease the musical, would not be possible without the Rock and Roll revolution of the Fifties. We think it fitting to look at it today in the light of the revolution that it celebrates.”