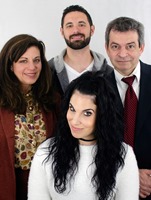 WHEN: Friday, May 18 at 8 p.m.; Saturday, May 19 at 8 p.m.; and Sunday, May 20 at 2 p.m.
WHERE: Mercer County Community College’s (MCCC’s) Kelsey Theatre, located on the college’s West Windsor Campus, 1200 Old Trenton Road
TICKETS: $18 for adults, $16 for seniors, and $14 for students and children. Tickets may be purchased online at www.kelseytheatre.net or by calling the Kelsey Box Office at 609-570-3333.  Kelsey Theatre is wheelchair accessible, with free parking next to the theater. (Above: clockwise from front, Maria Aromando as Sylvia, Gina Whalen as Kate, Dan Keyser (multiple roles), and Kurt Penney as Greg. Photo by Angel Obergon.)

A dog may be a family’s best friend, but for a couple of empty nesters, not so much. Join Forte Dramatic Productions as they bring A.R. Gurney’s Sylvia to MCCC. Show times for this romantic comedy are 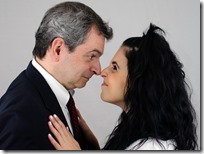 For empty nesters Greg and Kate, it’s time to reclaim their former life by moving back to Manhattan after years as classic suburban dwellers, replete with kids and a dog. As Kate tells Greg: "The dog phase of my life is definitely over." But Greg is unhappy at work and quietly navigating a mid-life crisis. When he finds a street-smart Labradoodle, Sylvia, wandering around in Central Park, he can’t resist the appeal of her undying love and loyalty. Sylvia quickly becomes a contentious, if adorable, ball of fur who parks herself right in the middle of Greg and Kate’s marriage. [Above, right: It's a case of puppy love for Greg (Kurt Penney) and his newfound canine friend, Sylvia (Maria Aromando)]

Premiering Off-Broadway in 1955, Sylvia is that unusual show that is both smart and silly, sophisticated and salty – and occasionally touching and sad. Its observations about relationships, nature, and growing older are as relevant today as when the show premiered more than six decades ago. The show has enjoy multiple revivals, including a 1995 Off-Broadway production that starred Sarah Jessica Parker as Sylvia and a 2015 Broadway version starring Matthew Broderick as Greg.

The Forte cast stars Kurt Penney of Pennington as Greg; Gina Whalen of Millstone as Kate; Maria Aromando of Bridgewater as Sylvia; and Dan Keyser as Bridgewater as Tom/Phyllis/Leslie.

Tickets are For a complete listing of adult and children's events, visit the Kelsey website or call the box office for a brochure.