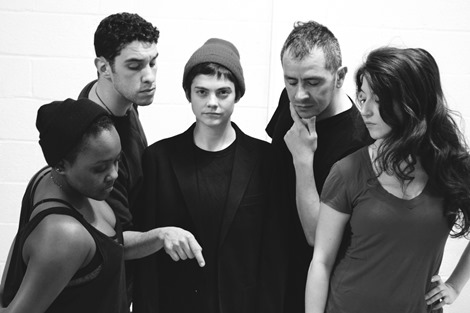 Redrawing maps, overthrowing leaders and dismantling governments, the aftermath of World War I created the world we still live in. Decline and Fall – a new theater experience presented by Jersey City Theater Center (JCTC) – is an original take on the Paris Peace Conference of 1919 that explores the impact of global politics on individual lives.

With nothing less than the fate of the future at stake, five world leaders must reconcile competing ideals, interests and perspectives in order to create a lasting peace. But can good but conflicting intentions prevent the wheels of history from spinning out of control again?

Decline and Fall  is a darkly comic play created by Nocturne Productions, a NYC-based theater company that combines movement, music, and text to invent a new theatrical language. This innovative, up-and-coming theater company reimagines the peace talks that led to The Treaty of Versailles that ended WWI—the so-called war to end all wars—in order to reveal the disconnect between individuals who hold power and the impact of their decisions on the lives of actual people. Based loosely on genuine historical scenarios, Decline and Fall analyzes the muddy filter of communication separating those making decisions and the ones affected by their decisions.

“The Paris Peace Conference at the end of WWI was a crucial event in world history and laid many of the foundations of our seemingly fragile modern geopolitical environment,” said Drew Weinstein, Artistic Director, Nocturne Productions. “How and why the decisions made by the peacemakers in 1919 came about is not only crucial to understanding our current landscape, but looking back on this event also allows us to glimpse human interaction at its most primal level and brings to light key flaws that continue to plague human cooperation.”

The show is presented as part of JCTC’s Resistance series. JCTC presents thematic series that explore – through visual arts, theatre, readings, dance, music and other performances – topics global in scope but relevant to the community.

In 2015, Weinstein received a JCTC Theatre Residency for his previous theatre company, the Barn Collective to develop and present work for JCTC’s Origins series. Nocturne Productions began developing Decline and Fall last year, and when Weinstein heard that Resistance was JCTC’s 2018 Spring series, he submitted a proposal.

“Drew was part of our first residency program three years ago,” said Olga Levina, Artistic Director, JCTC. “Then he went on working independently and successfully and now he is bringing his new work back to our black box theater. We are very happy to present his Decline and Fall as part of our Resistance Series.”

“As a creative team, we couldn’t be more excited to present our latest collaboration in Jersey City at Merseles Studios,” said Weinstein. “Based on JCTC’s commitment to investigating the core elements that make up our humanity through theatre, music, and visual art alike, we feel their Merseles Studios black box theater is a perfect venue to present this new work.”

Funding for Decline and Fall and Resistance was made possible by generous support from the Hudson County Office of Cultural & Heritage Affairs/Tourism Development, Thomas A. DeGise, Hudson County Executive and the Hudson County Board of Chosen Freeholders and the New Jersey State Council on the Arts.

Decline and Fall and Resistance was also made possible through the generosity of Ben LoPiccolo Development Group, JCTC’s Board of Directors, private donors and local Jersey City businesses.