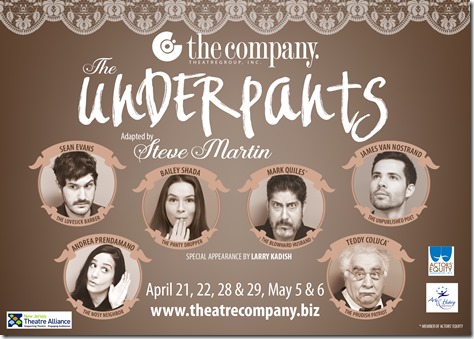 THE UNDERPANTS
Adapted by Steve Martin

WHEN: 6 shows only. April 21, 22, 28, 29, May 5 & 6. Saturdays at 8pm and Sundays at 3pm
WHERE: Hackensack Performing Arts Center, 102 State Street, Hackensack
TICKETS: $20-$25 at the door if available
90 minutes, no intermission
PURCHASE TICKETS ONLINE HERE
Visit www.theatrecompany.biz for details
Children under 4 are not permitted into the theatre. Teens and kids under 16 not permitted without parent.

The Underpants was written for the stage in 1910 by Carl Sternheim and adapted in 2002 by comedy legend Steve Martin. It is a laugh-a-minute comedy that begins with conservative German government clerk Theo Maske chastising his young wife Louise after he finds out her underpants fell down in public. SCANDAL! What comes next is a door-slamming, double entendre spewing, laugh riot of gentlemen callers, a nosy neighbor, an oblivious husband, and very proper scientist (Mr. Coluca) who walks into the wrong place at the wrong time.

Mr. Coluca has appeared in multiple commercials, TV shows (The Blacklist, Blue Bloods, Bull, and the upcoming Netflix Series The Good Cop) and films (including the soon to be released The Week Of (Adam Sandler), Hot Air (Steve Coogan & Neve Campbell) and the Independent films The Mimic, Abe & Low Tide). He is a proud member of The Company Theatre Group and appeared in their 2014 production of Breaking Legs.

ABOUT THE COMPANY THEATRE GROUP
An associate Member of the New Jersey Theatre Alliance, The Company Theatre Group is the only professional theatre company in residence at the HACPAC located at 102 State Street Hackensack, NJ

Founded in 2007, The Company Theatre Group is a non-profit, professional company of actors, writers, and directors in residence at The Hackensack Cultural Arts Center, Hackensack, NJ.

Drawing inspiration from the acclaimed Group Theatre, The Company is dedicated to developing and nurturing artists in an imaginative and safe setting, while at the same time pushing the boundaries of contemporary theatre with its non-choreographed style of production.  Like the Group Theatre, The Company creates heightened authentic human behavior on stage. “Life in Fiction” we like to call it. Truly living in the moment. So, no two performances are ever the same.

The Company creates an entertaining environment and a thought-provoking experience where each audience member can feel like a 'fly on the wall', watching the lives and events of real people in real situations unfold and sometimes unravel right before their eyes.