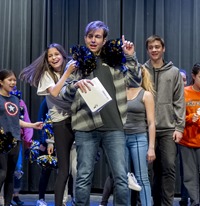 WHEN: Thursday, Friday and Saturday, April, 26, 27, 28, 7:30 PM
WHERE: The Collins-Tall Auditorium, 19 Columbus Drive, Tenafly, NJ
TICKETS: $20 premium; $10 for seniors and students reserved; $10 for general admission.
To purchase tickets visit www.tenaflytheatre.com or buy at the door. For more information or to request an interview, email sahncooper@tenafly.k12.nj.us.

The Tenafly High School is proud to present Legally Blonde as this year’s spring musical—based on the popular novel by Amanda Brown and the hit-movie of the same name—which chronicles the highly- entertaining story of a vivacious sorority girl who enrolls at Harvard Law School to win back her ex-boyfriend. The show has been cast and directed by Tenafly High School Theater/Speech Director Samuel Ahn-Cooper and Music Director Jim Millar and features music and lyrics by Laurence O'Keefe and Nell Benjamin and book by Heather Hach. 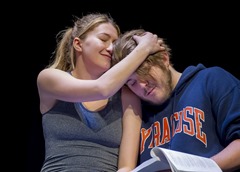 Legally Blonde tells the story of Elle Woods, a fashion savvy, UCLA sorority girl who finds her life turned upside down when she is dumped by her boyfriend Warren. In an effort to prove she is more than a ditsy blonde, she follows him to Harvard Law, where she struggles to fit; but in the end, she defies expectations, learns enough about law to successfully defend a murder trial, and manages to stay true to her smart, delightful self, despite the fact that no one shows much faith in her.

“There are many reasons I wanted to direct this show,” says Samuel Ahn-Cooper. “The script is funny, the music catchy and the characters are real. But, the main reason is that Elle Woods is an incredible feminine role model. While others put down her abilities and intelligence, Elle hardly ever doubts herself for a second. She is accepted to Harvard Law School, wins an important internship and is successful in her first court case. She decides on a goal and knows with 100% certainty that she can attain it, even as others only respond with incredulity or mockery. Amazingly, Elle never sees herself as stupid, despite the fact so many other people believe this so strongly about her. She smashes through all the stereotypes. In today’s climate, Elle Woods is the woman we need.”