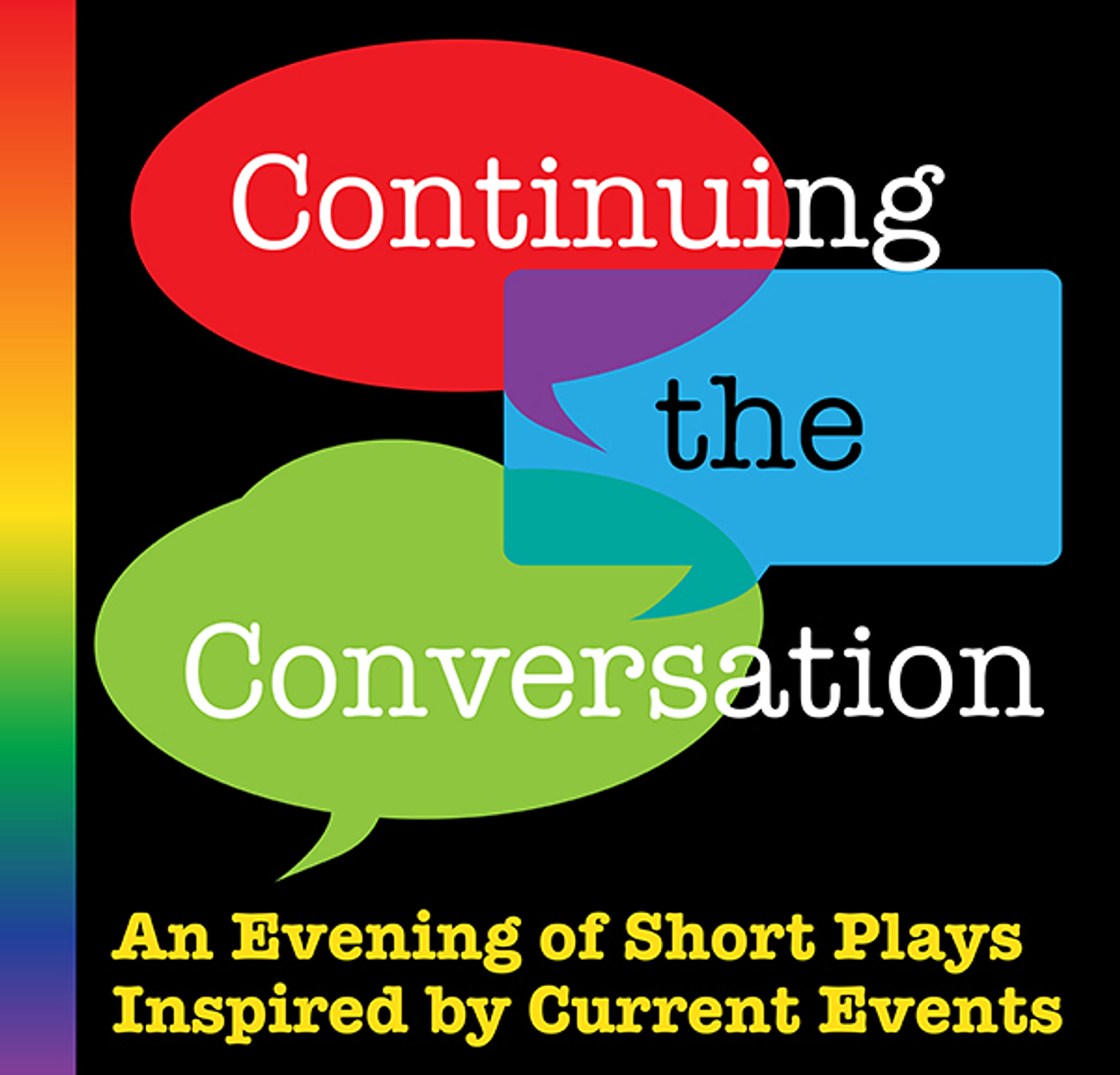 President Trump’s contention that the theater should be a safe place, uttered after the cast of Hamilton treated audience member V.P. Mike Pence to some unscripted lines, would have puzzled the Greek dramatists who used the theater to shake up the status quo through either biting comedy or tragedy that illuminated the hubris that brought human beings to their knees before the gods.

Building on a one-night event last season, Dreamcatcher Repertory Theatre has mounted a mainstage world premiere of Continuing the Conversation: An Evening of Short Plays Inspired by Current Events that will be performed in Summit through May 13. You may think you’re inured to such “ripped from the headlines” plotlines so ubiquitous on television, but never before will you have been as captivated and moved as you will be by this production.

Directed by company members Laura Ekstrand, Jessica O’Hara-Baker and Harriett Trangucci, the six one-act plays deal with themes in the forefront of current public consciousness: sexual harassment, media fatigue, the post-hurricane devastation in Puerto Rico, Confederate icons, the violence in Charlottesville and the decision to run for elected office. That these weighty matters are addressed with warmth, sensitivity and even humor makes them ideal for continuing conversation at one of the company’s post-performance talkbacks or in the car on the way home from the theater!

By virtue of their single act format, one-act plays tend to develop character quickly, with snappy dialogue, and tightly developed plots. Thus, a critic must be on guard not to give too much away and spoil the effect.

While all six are arrestingly written, performed and directed, the two that stand out for me are Downtown by Suzanne Bradbeer (directed by Trangucci) and The Presentation by Lia Romeo (directed by O’Hara-Baker). Downtown addresses the events in downtown Charlottesville where the white supremacists and neo-Nazis marched to protest the removal of Robert E. Lee’s statue from a city park. Noreen Farley is stellar as Dani whose afternoon of “fishing for the quiet” is upended by her daughter Carrie Anne (Beth Painter) who brings photographic proof that her younger brother Seth (Ben Kaufman) was there. Farley’s Dani desperately resists the idea that her boy could have been involved in the melee; her motherly instincts war with the image on Carrie’s cellphone. In the final moments, our hearts break for the mother forced to face hard facts about her offspring. 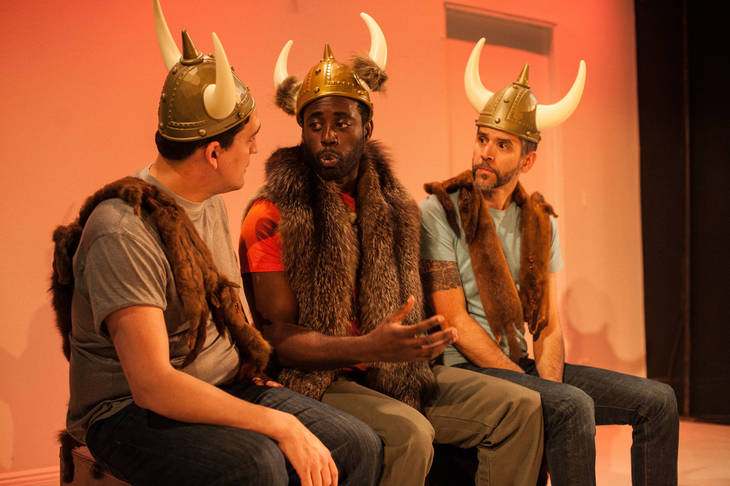 The Presentation uses broad humor that, as silly as it seems, really gets to the heart of a problem that’s been plaguing the world for, well, centuries. As animated, upbeat Samantha (Daria M. Sullivan) finishes a presentation about sexual harassment in the workplace to what appears to be a group of men (played by Aquino, Kaufman and Gary-Kayi Fletcher), the lights reveal them to be Vikings! The subsequent discussion devolves into a back-and-forth about raping, killing and pillaging, barbaric activities practiced by the Vikings who terrorized much of Europe during the eighth and ninth centuries. Just the idea that not much has changed vis à vis male-female relationships is as sobering as the playlet is funny. O’Hara-Baker’s light but deft directorial hand doesn’t let the silliness overshadow the serious message. 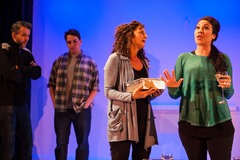 The other four plays are equally as fine. Richard Dresser’s Nevertheless She Persisted uses the words of Sen. Mitch McConnell’s putdown of Sen. Elizabeth Warren’s objections to Jeff Sessions’ confirmation as Attorney General to cast a sharp eye on male-female interactions through the lens of a friendly gathering of two couples. When Carey (Amanda Salazar, far right) calls out Bob (Michael Aquino, left) on his tendency to hit her when she’s not paying attention to him, he, his wife and her husband deny it ever happened. Carey’s perception and experience are blithely labeled “fake news,” and Carey feels “the truth is under attack.” It’s interesting to watch Bob’s wife Jen (Beth Painter) and Carey’s husband Morgan (Ben Kaufman) squirm in discomfort; perhaps they’ve witnessed Bob’s behavior but are not willing to admit it. Ekstrand resists the temptation to hit the audience over the head to make the point; she has her actors use body language and facial expressions to telegraph that Bob is a bully and gets away with it because no one wants to speak up and ruin a friendship. Silence in this case is not golden. 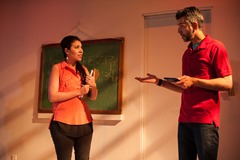 The saddest of the lot is Silent Aurora by Dania Ramos, directed by Trangucci. Soon after Hurricane Maria, Ruben, from the Army Corps of Engineers, comes to inspect a school in Puerto Rico’s central mountains. The books are ruined, the library roof has collapsed and the electricity is intermittent, but the most searing devastation is psychological: Star student Aurora has not spoken since the storm and her obsessive-compulsive behavior telegraphs her PTSD. In contrast to Ruben’s officious demeanor (Michael Aquino is maddingly effective in this role), Ramos has the teacher Sonia (Salazar) plaintively cry, “The greatest nation on earth has forgotten its citizens!” Salazar conveys not only the teacher’s despair at what has happened to her home and school but the terrible toll it has taken on her student, played with expressive eyes by Salazar. (Above: Salazar and Aquino)

In the “Year of the Woman,” William (Fletcher) considers leaving his hated job in corporate law to run for political office. Seeking Special Counsel, he seeks out his former teacher Roberta Muller (Noreen Farley), even going so far as to visit her at the nursing home where her family has “put her.” In moments of lucidity from her dementia, Mrs. Muller utters some very sound advice and opinions about politics and politicians, leading William and his wife Beth (Salazar) to confront the reality of such a momentous decision. Again, Farley portrays a woman battling what she knows is the truth; batty or lucid, her performance is always convincing.

The final offering, Monumental by David Lee White and Kate Brennan (directed by Ekstrand), confronts the dilemma facing Joseph Bedford College regarding the portrait of its racist founder. Concurrent scenes—the time of its 1958 unveiling and the 2018 demonstrations to take it down—highlight the difficulties faced by both camps. “Take it down.” “Leave it up.” The two sides, administrators Harold (Kaufman, in 1968) and Farley (as Bedford descendant Liz in 2018) vs. students Paul and Maria (Fletcher in 1958 and Sullivan in 2018, respectively), effectively argue in song, giving a glimpse into each of the problem.

Continuing the Conversation is a worthwhile addition to drama’s canon. The six thought-provoking plays should provide much fodder for serious thought and talk. With humor and sensitivity, they tackle thorny problems in such a manner as would make the ancient Greeks proud.

Continuing the Conversation will be performed at the Oakes Center, 120 Morris Ave., Summit, through May 13. For information and tickets, visit www.dreamcatcherrep.org online or call 908.514.3654.