REVIEW: “A DOG STORY” A DIVERTING CHARMER @ THE BICKFORD THEATRE 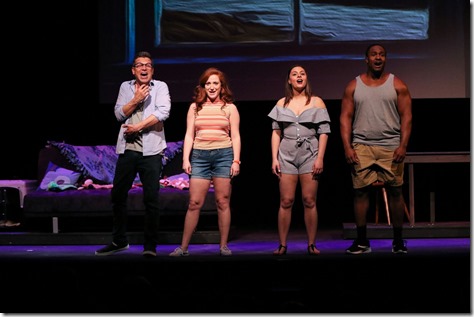 They’re called “man’s best friend.” They’re treated like members of the family. People purchase houses only if there’s room for them to run and play. Who are they: DOGS!

But dogs are also “chick magnets.” At least that’s the premise of Eric Weinberger’s charming, if predictable, musical, A Dog Story, now receiving its New Jersey premiere at the Bickford Theatre in Morristown, after a 2014 world premiere in Key West and an Off-Broadway run in 2016. 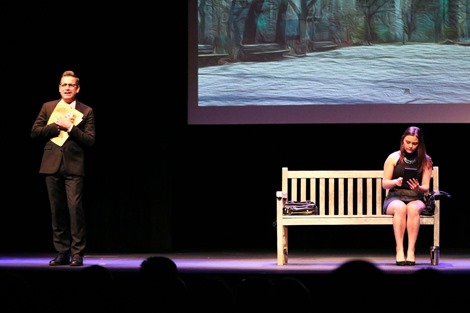 The book by the late Eric Weinberger revolves around Roland, a shy, socially awkward 24/7 workaholic. Observing that he’s being passed over for partner in his law firm because he’s not married, Roland is determined to find a wife by Labor Day when the next slot will become empty. To solve the dilemma, his testosterone-driven roommate Guy advises him to get a dog, better yet, a puppy—a fool-proof way to win a girl’s heart. At first, the scheme appears to work, when Blair, a young woman Roland has spotted in Central Park, shows up in the Hamptons where he’s taken a summer cottage and is attracted to him because of the pooch, aptly named Cupid. Because Roland knows zilch about raising and training a pup, he hires Miranda from Good Dog Training who wisely observes that she’ll have to train Roland before the dog can be considered “trained.” But Blair turns out to be too much of a hot number for Roland, and he falls in love with the dog intended as a prop to be given away at the end of the summer. At that point, Roland discovers Miranda’s charms—and well, you know the rest of the story. (Above, Daniel Robert Sullivan as Roland spies Clare Fitzgerald as Blair in Central Park)

Directed by Bickford Artistic Director Eric Hafen, the peppy, pleasant music and sometimes clever lyrics penned by Gayla D. Morgan are delivered by a quartet of young actors, all with good musical ability. Daniel Robert Sullivan (Roland) shows his professional experience (he played Jersey Boys’ Tommy DeVito in Vegas, Toronto and on tour) as he makes his character’s charming awkwardness palpable. From the show’s very first number (“Married Over Labor Day”), he owns the stage. He’s especially winning performing the “Vacation/Training Tango” with Miranda or begging a missing Cupid to “Please Come Home.” It’s hard to take your eyes off him. 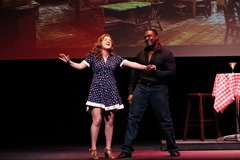 Shabazz Green has a fine time flexing his very obvious muscles and thrusting his pelvis as he gives the nerdy Roland advice on attracting—and hooking up with—girls. Unfortunately, Weinberger and Morgan have created a cartoon character who’s more buffoon than real. But Green has a good voice and comedic timing, so he adds some levity to the tale. 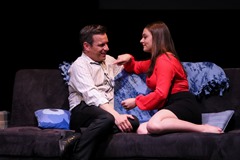 Of the four, Clare Fitzgerald (right, with Sullivan) as Blair appears to be uncomfortable onstage. Sexy in very short skirts, her character, too, is more caricature than real and requires her to utter some over-the-top dialogue that’s rather off-putting. She does a fine job declaring her love for the “Freedom” of a summer vacation from her high-charged job as the senior manager at a hedge fund, but she doesn’t have much to do except strut around the stage and lunge at Roland in a quest to “Make Some Noise.” Fitzgerald sings well, but the part doesn’t require much of her in the way of acting, leaving her looking awkward most of the time.

What about the dog, you ask? Well, Morgan and Weinberger have specified that Cupid be depicted as invisible so each audience member is free to imagine him as the dog breed they love best. To make this work, the actors—chiefly Sullivan and Ambriano—have to pick “him” up, cuddle him and pet him so that we “see” him, a feat they carry out with genius.

The plot unfolds on a functionally furnished stage set designed by Jim Bazewicz, using projections of what appear to be paintings of window views, beachscapes and Hampton cabins to set and change the scenes effortlessly. Roman Klima’s lighting and sound enhance the summer atmosphere; thankfully, no barking or yipping sounds intrude. Hailey Benson’s costumes suit each character, even if I experienced some moments of trepidation about the shortness of Blair’s skirt. The two-man orchestra, directed by Stephanie Lindley provided good, if sometimes too loud, accompaniment.

Yes, boy meets dog meets girl loses girl meets right girl may sound a bit trite, but A Dog Story reminds us that there is room in the theater for diverting musical comedies to take our minds off the weighty matters of day-to-day living. The Bickford Theatre’s production may not solve the Syrian crisis, but it does remind us that, in the “war” of relationships, humor and love—of human or dog—can bring about a happy if unexpected ending.

A Dog Story will be performed at the Bickford Theatre in the Morris Museum, 6 Normandy Hgts. Road, Morristown, through April 22. For performance information and tickets, call 973.971.3706 or visit www.morrismuseum.org/bickford online.