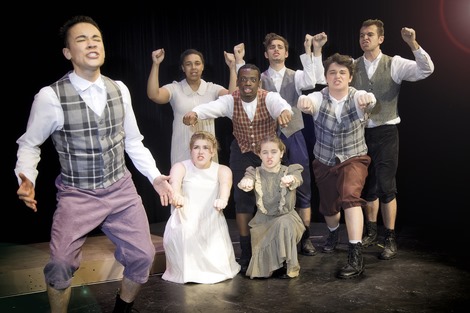 WHEN: Fridays, Apr. 6 and 13, at 8 p.m.; Saturdays, Apr. 7 and 14, at 8 p.m.; and Sundays, Apr. 8 and 15, at 2 p.m. A reception with the cast and crew follows the opening night performance on April 6.
WHERE: MCCC’s Kelsey Theatre, located on the college’s West Windsor Campus, 1200 Old Trenton Road.
TICKETS: $20 for adults, $18 for seniors, and $16 for students and children. Free parking is available next to the theater.  Tickets may be purchased online at www.kelseytheatre.net or by calling the Kelsey Box Office at 609-570-3333. For a complete listing of adult and children's events, visit the Kelsey webpage or call the box office for a brochure.
(This show is not recommended for young children.) Set in 1891 Germany, the grown-ups are in firm control – except that their teenage children have other plans. This universal story of self-discovery and sexual awakening focuses on a group of friends, most notably, the strong-willed Melchior and innocent Wendla, whose longings and curiosity draw them together, and anxious Moritz, who strives to live up to the strict expectations of family and society. As they confront issues of morality and rebellion, they turn to each other for guidance and solace.

Their angst-ridden journey is set to the brilliant rock and roll score by Steven Sater and Duncan Sheik. The original Broadway production premiered in 2006 and was the winner of eight Tony Awards, including Best Musical. The show is based on the controversial play by Frank Wedekind, once banned in Germany. (Above, right: Julia Toto of Pennington is Wendla and Marshall McGuire of Ewing is Melchior. Photo by Robert Terrano.)

Observes MCCC Theatre/Dance Program Coordinator Jody Gazenbeek-Person, the cast features a mix of actors who are opening their own doors of communication about the messy, emotional struggles of growing up, a central theme in the show.

“We cast in equal numbers MCCC students, community members, and high school actors. This is providing opportunities for dialogue – not just within the comfort of our college community, but among people from around the region,” Gazenbeek-Person said. “My hope is that everyone involved in this production, including the audience, will leave the theater feeling more open to talking about the pressures facing adolescents. Discussing sexuality and reproduction is still challenging for many young people and their parents. But not discussing these issues candidly can lead to some very difficult circumstances.”

The cast stars Marshall McGuire of Ewing as Melchior; Julia Toto of Pennington as Wendla; and Ted Braun of West Windsor as Moritz. Their friend group includes Erica Boyea of South Plainfield as Martha; Tyler Fowler of Millstone as Ernst/Reinhold; Jackie Galli of Lambertville as Thea; Bridget Hughes of Jackson as Ilse; Karena Lewis of Ewing as Anna; Liam Smith of Yardley, Pa., as Hanschen/Rupert; Matthew Swanson of Titusville as Otto/Ulbrecht; and Donte Wilder of Ewing as George/Dieter.

Featured in the adult roles are Lauren Suchenski of Yardley, Pa., and Jim Morris of Plainsboro.