"A Dog Story" to open at the Bickford Theatre on Friday, April 13th 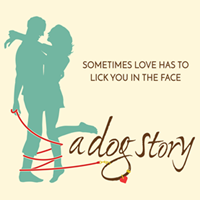 A hit in its Off-Broadway run in late 2016, A Dog Story is an enchanting musical that follows the story of Roland, played by Daniel Robert Sullivan (left), who starred in both the Broadway and National Productions of Jersey Boys. Roland is a career-driven lawyer, who thinks he must be married to get the partnership he desperately wants. He takes the advice of his best friend to get a dog in order to attract the attention of women. With first dates, angry tangos, and a sudden disappearance, Roland ends up discovering there’s more to life when you “get a dog”!

“Reading this bright and positive new musical made me smile. Hearing the music made me laugh and love. Everyone knows that a dog can be emotionally transforming to the soul. If you love dogs as much as I do, you will love A Dog Story," commented Director Eric Hafen.

Ms. Morgan (left) will attend the opening of A Dog Story on Friday, April 13, and join the cast and creative team at a party for Bickford Theatre subscribers and the press.

There will be an opening night cast party for Bickford Theatre subscribers and members of the press following the performance on Friday, April 13. Composer and lyricist, Gayla D. Morgan will be in attendance this evening.

There will be a post-performance chat with the cast and creative team on Thursday, April 19. Composer and lyricist, Gayla D. Morgan will also be in attendance this evening.

Win tickets to A Dog Story
The Morris Museum hopes to engage the community further with this production. The theater has announced an opportunity on Instagram to share one's own dog story and photo for a chance to win a pair of tickets to the opening night performance followed by the cast party on Friday, April 13. Visit the Morris Museum Instagram page for details.

Eric H. Weinberger (Book) was delighted to combine his passions for musicals and dogs in A Dog Story. His other musicals are Wanda's World, which was nominated for Lucille Lortel and Drama Desk Awards, and ...And Then I Wrote A Song About It, which had productions in New Jersey and California and was presented at 54 Below in New York City in May 2016. Eric also wrote a number of plays. His Class Mothers '68, starring Tony-winner Priscilla Lopez, was produced in New Jersey and Off–Broadway. Tea For Three: Lady Bird, Pat & Betty, which he wrote with Elaine Bromka, who also stars in the show, has been touring the country since 2004 and is published by Dramatic Publishing. Eric passed away in 2017 after a valiant 4-year battle with cancer, leaving behind husband Steve, Jack Russell mix Milo, and his ever-grateful friend and collaborator, Gayla.