Okay. I’ll admit it: I do love a play about historical events. Drama, comedy, dramedy—it doesn’t matter. And if it involves a battle of wills, then so much the better!

That’s why I was looking forward to reviewing George Street Playhouse’s production of Trying, Joanna McClelland Glass’s two-character play about the time she spent as a young assistant to 81-year-old, ailing Francis Biddle, Chief Judge at the Nuremberg Trials (Spencer Tracey played him in Judgment at Nuremberg) and Attorney General under FDR, among his many government positions. 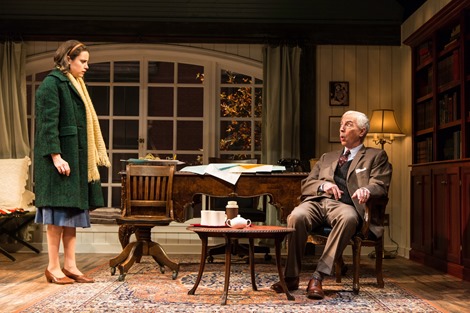 Often lacking suspense-producing action, two-handers are notorious for being talky, but this charmingly intimate production features two fine actors portraying interesting personalities who “grow” so much that I found myself a tad melancholy when the play ended—a testament to how well the playwright, director and actors engaged my attention and sympathy over the two-hour running time.

With echoes of Pygmalion/My Fair Lady, Glass’s play recounts the final year of Judge Biddle’s life, as he attempts to get his papers (and his life) in order with the help of a new assistant, 25-year-old Sarah Shore. Successor to a line of disastrous predecessors (all middle-aged matrons), this young woman from Saskatchewan, Canada, shows that, despite her demure demeanor, she has the spine to stand up to this formidable, curmudgeonly, internationally known Philadelphia patrician—winning both his respect and, yes, affection that match her feelings for him.

Glass infuses this intimate portrait with serious history and tension-relieving comedy, both conveyed with flair by a duo of consummate performers. Under Jim Jack’s inspired direction and staging, the very air crackles as Sarah and the Judge engage in a verbal duel, advancing and retreating, feinting and parrying to what is essentially a draw. 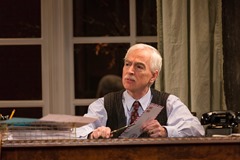 With his thin mustache and aquiline profile, Philip Goodwin (right) embodies the type of man who would be a long-time civil servant. Despite his failing memory, he always has to have the last word, possesses a wide range of knowledge, asks questions but doesn’t wait to hear the answer, corrects Sarah’s vocabulary and grammar, and feels a bit bereft at finding himself still alive when all his colleagues have died. Goodwin imbues the character with an aristocratic mien, from his patrician accent and demeanor to a standoffishness that eschews physical contact. But what starts out as rather disagreeable and snobbish becomes softer, more empathetic over time, so that by the final scenes we, too, have fallen in love with the old codger. 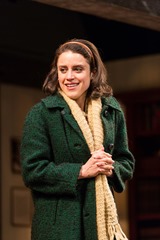 As Sarah (“with an h,” as the Judge calls her), Carly Zien (left) doesn’t let Goodwin steal the show. Her self-proclaimed “prairie populist” calls out his snobbery about an Ivy League education, argues the merits of “speed writing” vs. the Gregg shorthand method, quotes e.e. cummings, is “inordinately anxious to work” and manages to get the Judge to use “modern” technology—all in a way that’s spunky but not rude. As their intimacy deepens, she reveals personal details about her childhood and marriage that he listens to and responds. Zien’s charming performance enriches what could have been a dry historical tale, and her character’s ability to stand up to a powerful man (albeit a bit of a bully, not a sexual harasser) resonates with the audience.

Depicting the Judge’s study in what used to be the hayloft over a stable on his Georgetown estate, Jason Simms’ set telegraphs the man’s character as well as providing an appropriate canvas on which this relationship unfolds. Lighting by Christopher J. Bailey conveys the passage of the seasons and weather conditions, and Esther Arroyo’s costumes suit the time period, characters’ social statuses and personalities. 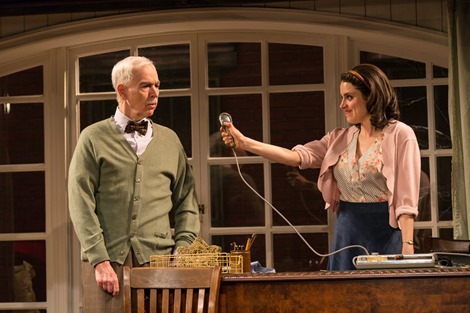 In Trying, Joanna McClelland Glass has given us a charmingly intimate glimpse into the lives of two people separated in age by more than a half century who, struggling to communicate, come to an understanding of how their experiences can influence each other. Smartly written dialogue, appealing characters portrayed by talented actors make Trying a winner for George Street Playhouse. Through “trying” circumstances, Francis Biddle and Sarah Shore “try” to connect. That they do makes for an informative and heartwarming play.

Trying will be performed at George Street Playhouse’s interim location, 103 College Farm Road, New Brunswick (on Rutgers Cook Campus) through April 8. For information and tickets, call the box office at 732-246-7717 or visit www.GSPonline.org.