In the 1970s and ‘80s, cornetist/trumpeter Warren Vache (right) played in the house band at Eddie Condon’s on West 54th Street in New York City. Condon’s was down the street from Jimmy Ryan’s where legendary trumpeter Roy Eldridge performed. During their breaks, Eldridge and the young Vache would listen to each other. That, says Vache, was, “the best teaching experience I ever had.” 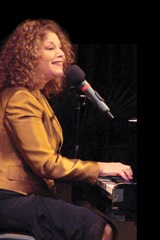 This year’s Stomp will be dedicated to the memory of drummer Chuck Slate, Sr., who died last November. Slate’s Traditional Jazz Band performed at the first Stomp in 1970 at the Martinsville Inn in Martinsville, NJ. Throughout the ‘70s and ‘80s, leading a band or trio, Slate appeared at several New Jersey venues, mostly in Morris County or the Somerset Hills. They included the Ride‘n Hunt Club and the Bernards Inn in Bernardsville, NJ, The Store in Basking Ridge, NJ, and Rod’s in Convent Station, NJ. He also performed at the Chester Inn and Hillside Lounge in Chester, NJ, prompting The New York Times’ John S. Wilson, in 1972, to refer to Chester as the “jazz center” of New Jersey. Clarinetist Joe Licari, who played with Slate in the 1980s, will receive the NJJS Distinguished Musician award, and jazz writer and critic Will Friedwald will be honored as this year’s Jazz Advocate.

The George Gee Swing Orchestra is a regular attraction at Swing 46, the jazz supper club on West 46th Street in New York City. In a review of Swing Makes You Happy!, Gee’s 2014 album on the Rondette Jazz label, londonjazznews.com praised trombonist Gibson’s arrangements, which “give the nonet the feel of a small big band. With a pair of trumpets, a single trombone, three saxes, and three rhythms to work on, his [Gibson’s] writing has the kind of tight, punchy call and response patterns that the late-era Basie band deployed.”