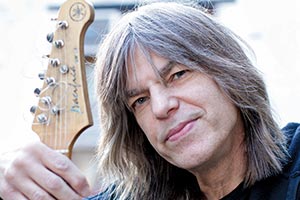 The Mike Stern Band featuring Teymur Phell and Richie Morales will headline the 7th Les Paul Festival Concert at Ramapo College. The annual festival celebrates Mahwah resident Les Paul’s innovative spirit as a musician and technologist by hosting a week of guest speakers and workshops for Ramapo’s music students culminating in a concert for the college and regional community. The Les Paul Festival is presented by the Ramapo College Music Program, the Berrie Center for the Performing and Visual Arts, the School of Contemporary Arts, the student-run Ramapo Music Club, and the Mahwah Museum.

Mike Stern is regarded as one of the true guitar greats to a generation of contemporary jazz guitar aficionados. A player of remarkable facility, his searing lines are informed mainly by bebop and the blues while also carrying a rock-tinged intensity. Stern made his mark with Miles Davis in the early 1980s before launching his solo career in 1985. Since then he has released 17 recordings as a leader, six of which were nominated for GRAMMY® Awards.  His latest album is titled “Trip.”  Stern has also played with Blood, Sweat & Tears, Jaco Pastorius, Michael and Randy Brecker, Eric Johnson, Bela Fleck, and numerous other major jazz musicians.  Stern was presented with Guitar Player magazine’s Certified Legend Award in 2012. Ramapo College is thrilled and honored to have Mike Stern headline the 7th Les Paul Festival, during which he will also provide a workshop for Ramapo music students.

Bassist Teymur Phell moved to New York in 2011 and has since built a reputation as a vibrant and virtuosic player. He has performed with Mike Stern, Arturo Sandoval, Danielia Cotton, Alex Young, Leni Stern, Kevin Salem, Lafayette Harris, and Oz Noy. Born in Azerbaijan to a family of professional musicians—his grandmother Elmira Nazirova was a celebrated classical pianist—Teymur studied classical bass at the Jerusalem Academy of Music and toured with Palestinian singer Amal Murkus.