Recent Work by Art Faculty Members to be Displayed at RVCC

WHEN: February 16-March 16. An artist’s talk will be held in the Art Gallery on Friday, February 16, from 5-6 p.m. A reception will follow from 6-7 p.m. Both are free of charge and open to the public. Refreshments will be served.
WHERE: Art Gallery, Raritan Valley Community College (RVCC), 118 Lamington Rd. Branchburg
For further information, visit www.raritanval.edu. 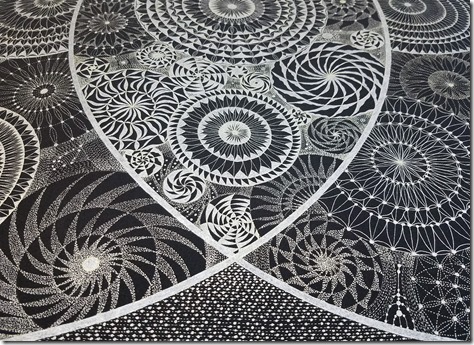 Heejung Kim, an adjunct faculty member at RVCC since the Fall 2014 Semester, will feature recent works of ink on paper along with selected artist books created over the past 20 years. Her art is influenced by the patterns and symbols in Tibetan Mandala paintings. Her star-like images come from dreams she has had since her childhood. Using repetition like the mantras in meditation, Kim pushes her creative visions into a hypnotic space, carrying the viewer into a surreal sense of illusion—as if one is moving through a vast void. [Above: “Eclipse,” (detail) by Heejung Kim, 44" x 30", gold marker on paper, 2017] 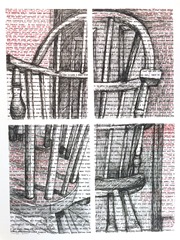 Val Sivilli, who has served as an adjunct faculty member at RVCC for 15 years, will premiere a collection of drawings titled "57". The works, sketched daily for six months, depict simple scenes of common objects in a familiar environment. “Because a constant stream of world and national news and other aggravating nonsense seems to be audible everywhere,” says the artist, it is a constant companion to her drawing practice. Sivilli types the daily news directly over her drawings using a 1965 Smith Corona Typewriter. The exhibition features single drawings, groups of seven drawings that represent a single week, and artist books. The display also includes an ongoing series of work titled “BURN IT.” [Left: “Chair,” by Val Sivilli, 18" x 24", pen and typing on paper, 2016]

Sivilli is one of four founding members of THAT (The Hunterdon Art Tour), which will be kicking off its second year in May. For additional information about Sivilli’s work, visit valsivilli.com.