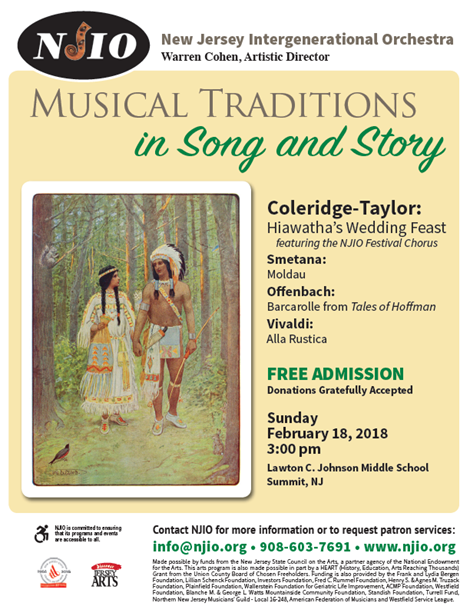 Musical Traditions in Song and Story

The performance will feature performances from all three of NJIO’s orchestral ensembles, as well as its Flute Choir and Festival Chorus.

NJIO’s Symphony Orchestra, conducted by Artistic Director Warren Cohen and featuring the Festival Chorus, will dazzle audiences with a rendition of the under-performed “Hiawatha’s Wedding Feast,” the first of a trilogy of cantatas by Samuel Coleridge-Taylor. Coleridge-Taylor, an 1800’s Englishman, was a descendant of African-American slaves and made multiple trips to America in his lifetime, including an invitation to the White House by President Theodore Roosevelt.  His most famous work, The Song of Hiawatha, is a trilogy of cantatas based on the epic poem of the same name by Henry Wadsworth Longfellow, and was an immediate hit upon its London premiere in 1898.  In both England and America, he was so celebrated that he became known as the “African Mahler,” and his works have been performed worldwide ever since.

NJIO’s Symphony will also perform the moving and wonderfully composed “Moldau” by Bedrich Smetana, whose most famous composition about a river in Bohemia combined the symphonic poem form with nationalistic ideals.  Intermezzo Orchestra will be performing Vivaldi’s delightful “Concerto Alla Rustica” and Offenbach’s “Barcarolle” from The Tales of Hoffmann.  Be sure to arrive half an hour early to catch Prelude Ensemble’s performance in the lobby, and Flute Choir’s performance at intermission!