The three men, Marc (Duk Kim), Serge (Wallnau) and Yvan (Carolan) are longtime best friends who find their relationship severely tested when Serge buys an expensive painting for 200,000 francs (the setting is Paris). The painting is by a respected modern artist. It is a large, completely white painting. Marc and Yvan have different reactions to the canvas. Marc, Serge’s social mentor, is horrified, and calls the painting s**t; Yvan, forewarned of the uniqueness of the painting, attempts a more restrained reaction. 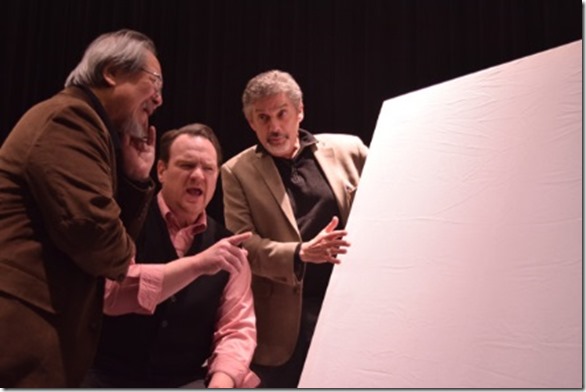 The favorite star turn was Kevin Carolan’s monologue about the stress of dealing with his approaching wedding. The audience responded with a round of enthusiastic applause. He is a marvelous comedy actor. All three were perfectly cast. Randall Duk Kim was exceptional as Marc. He demonstrated that he could easily conduct a master class in acting. Carl Wallnau, the CSC’s artistic director, impresses as always with his excellence in comedy, drama, and music (fine voice).
The play is presented as a series of scenes (no intermission) that vary from three and two characters, to several single character monologues directly to the audience.

The set, a stark but handsome apartment living room, designed by Tim Golebiewski, serves as the residence of all three via clever prop changes. Particularly effective is the often overlooked music between scenes by sound designer Carlos Dias Jr. The stage manager is Danielle Constance. Ed Matthews is the lighting designer. Ashleigh Poteat designed the costumes. Jeff Chase serves as technical director.

Ticket prices $27.50 for adults and $17.50 for children under 12 on matinee and Friday evening performances.  Saturday evening performances are $29.50 for adults and $17.50 for children under 12.  Thursday evening performances are $27.50 for ALL SEATS with a special ‘buy one/get one’ rush ticket special when purchased in person at the Centenary Stage Company box office starting two hours prior to performance time.  The ‘buy one/get one’ rush ticket special is not valid for advance ticket sales, on – line or by phone.  Offer is only valid in person at the box office during the designated time and may not be combined with any other special offer or discount.

Centenary Stage Company is also offering a buffet matinee for groups of 25 or more (up to 50) on Wednesdays February 21 and 28. Buffet matinees are $45.00 per person and include pre-show dining in one of CSC’s private dining rooms, as well as admittance to the 2pm matinee.  Buffet matinees must be scheduled in advance.  CSC also offers discounted tickets for group sales of 25 or more.  To find out more or schedule your group or buffet matinee call the Centenary Stage Company box office directly at (908) 979 – 0900.

For more information or to purchase tickets visit centenarystageco.org or call the Centenary Stage Company box office at (908) 979 – 0900.  The box office is located in the Lackland Performing Arts Center at 715 Grand Ave. Hackettstown and is open Monday through Friday from 1 – 5pm and two hours prior to every performance.