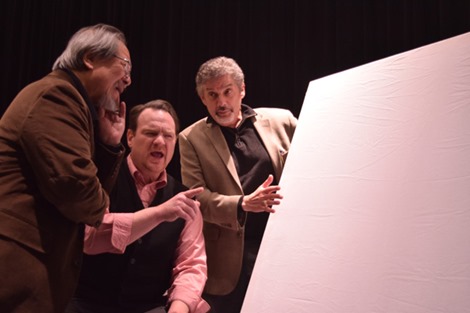 For more information or to purchase tickets visit centenarystageco.org or call the Centenary Stage Company box office at (908) 979 – 0900.  The box office is located in the Lackland Performing Arts Center at 715 Grand Ave. Hackettstown and is open Monday through Friday from 1 – 5pm and two hours prior to every performance.  Centenary Stage Company can also be found across social media platforms; Facebook, Twitter and Instagram.  Like and follow to receive the latest CSC news and special offers.

“Wildly funny, naughtily provocative…” says the NY Post, it all begins when Serge buys an expensive painting by a celebrated artist. A white canvas with white diagonal lines. Old friends square off over the canvas, using it as an excuse to hilariously batter one another over various slights and failures. Art is a hilarious exploration of the very notion of what constitutes art while examining the meaning of friendship. "Anyone looking for a play that is funny, sophisticated, stylish, stimulating and moving should go to 'ART'." (Independent, London).

Commercially known for his film work as the ‘Keymaker’ in The Matrix Reloaded and the voice of Master Oogway in Dreamwork’s Kung Fu Panda franchise, Obie Award winning Randall Duk Kim made his acting debut in 1960 and has spent most of his working life on stage. His performances in the regional theatres include seasons at the American Conservatory Theatre, the Guthrie Theater, the Arizona Theater Company, the NY Shakespeare Festival, and the American Place Theater. His film credits include PRISONERS IN TIME, THE REPLACEMENT KILLERS, LOST EMPIRE (aka THE MONKEY KING), ANNA AND THE KING, MEMOIRS OF A GEISHA, DRAGONBALL EVOLUTION, THE LAST AIRBENDER, and NINJA ASSASSIN. His Broadway credits include the THE KING AND I, David Henry Hwang’s GOLDEN CHILD, and FLOWER DRUM SONG.

Award-winning actor and singer, Kevin Carolan has built a successful career over the last 25 years and has been directed by some of the most talented artists in show business, including Martin Scorese, Larry David, Tim Van Patten, Joe Mantello, Walter Bobbie, James Lapine, and Mel Brooks.  He has numerous appearances on television shows such as Orange Is the New Black, Curb Your Enthusiasm, The Middle, The Good Wife, Royal Pains, Spin City, Fringe, White Collar, and the recurring role of the Barker in HBO’s Boardwalk Empire.

Centenary Stage Company’s own award winning Artistic Director Carl Wallnau recent acting credits include Lionel Percy in Bakersfield Mist (Bickford Theatre at the Morris Museum) alongside 4 time daytime Emmy Award winner Kim Zimmer, Dr. Watson in The Hound of the Baskervilles and Pandarus in Troilus and Cressida (Pennsylvania Shakespeare Festival), and Mr. Mayhew in Witness for the Prosecution (Bristol Riverside).  He has directed numerous productions including the world premieres of Inventing Montana, The Tillie Project and The Poetry of Pizza, as well as, the American premiere of A Laughing Matter and the New Jersey premieres of Below the Belt, Square One, Rounding Third, Marvin’s Room and The English Bride, which later transferred to NYC for a run at 59E59.

Centenary Stage Company is also offering a buffet matinee for groups of 25 or more (up to 50) on Wednesdays February 21 and 28. Buffet matinees are $45.00 per person and include pre-show dining in one of CSC’s private dining rooms, as well as admittance to the 2pm matinee.  Buffet matinees must be scheduled in advance.  CSC also offers discounted tickets for group sales of 25 or more.  To find out more or schedule your group or buffet matinee call the Centenary Stage Company box office directly at (908) 979 – 0900.

Centenary Stage Company’s production of Yasmina Reza’s Art is sponsored in part by Heath Village Retirement Community and The House of the Good Shepherd.