After officially opening on May 5th of last year with a ribbon cutting ceremony led by the mayor of Jersey City, the restored White Eagle Hall attracted audiences with a dynamic schedule of music, theater and dance. As this historic theater begins its first full-year of programming in 2018, White Eagle Hall is poised to become a leading performing arts center in the New Jersey/New York area. 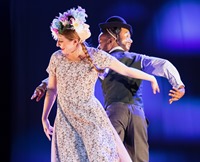 On January 21st, for its first new show of the year at White Eagle Hall, JCTC presents Grace, an afternoon of dance with Nai-Ni Chen Dance Company, Freespace Dance, and LaneCo., an afternoon of captivating dance pieces, all choreographed by women.

Next Month, JCTC presents Hamlet by Bedlam, a reimagining of Shakespeare’s timeless tragedy by one of the most cutting-edge theatre companies in New York. Another exclusive show, the White Eagle Hall presentation of Hamlet by Bedlam opens a national tour of the production with a new, diverse cast.

White Eagle Hall’s restoration returned a vital public assembly facility to the Hudson County community. In less than a year, the fully renovated White Eagle Hall has become one of Hudson County’s most beloved venues. “Reopening White Eagle Hall was an amazing and sometimes difficult journey,” said Olga Levina, Artistic Director, JCTC. “But the response has been overwhelmingly positive and for 2018 we have even more amazing programming to present.”