REVIEW: THEATRICAL ROLLERCOASTER RIDE WILL THRILL YOU @ THE BICKFORD THEATRE

In the lexicon of drama, a thriller features a villain-driven plot that elicits feelings of suspense, excitement, surprise, anticipation and anxiety, keeping audiences on “the edge of their seats” as it builds toward a climax. Plot twists and mind games abound in narratives that revolve around revenge, death traps, twisted personal relationships and romantic triangles leading to murder. Think Deathtrap, Sleuth, The Mousetrap or Dial M for Murder, to name a few.

Well, add to that list Rupert Holmes’ deliciously convoluted thriller, Accomplice¸ now onstage at the Bickford Theatre in the Morris Museum. Best known for his song “Escape” (aka “The Pinã Colada Song”), Holmes has constructed a plot so full of twists and turns that audience members are in danger of incurring whiplash as the action unfolds! And while you’re trying to figure it all out during intermission, rest assured that the ending will be more convoluted than you ever imagined it to be.

Because we were all sworn to secrecy on opening night, I cannot divulge much about the plot developments. Suffice it to say that it involves adultery, trickery, deception—and murder. This sure puts a crimp in my writing a review of the script—and the acting, lest I give away any plot details by critiquing the performances. I am really going to have to dance around this one.

Accomplice, a two-act, four-scene, four-actor play, takes place in the very isolated, stylish weekend retreat of affluent (but boring) Derek Taylor and his perky wife Janet. The set, designed by Jim Basewicz, is the epitome of the cottage genre—with half-timbered walls, roof beams and an imposing stone fire place—furnished by Dani Pietrowski with low-key, albeit opulent, British-style furniture. Lighting and sound by Roman Klima emphasize the eeriness of the location and situation, and Fran Harrison’s costumes emphasize the couple’s toney status, with a flowing garden party frock and elegant gown for Janet and appropriate bespoke duds for her spouse. 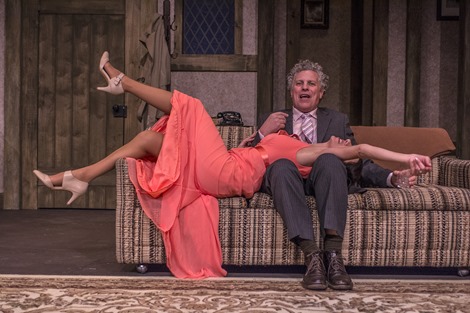 As for the performances, Lilli Marques’ British accent is, at times, difficult to understand, especially for those sitting stage left. However, her character’s tightly wound demeanor is germane to the plot, and she moves like a cat ready to pounce. Emaline Williams and Tait Ruppert (the latter so good in Alliance Rep’s Later Life; above with Marques; below with Williams) also stand out, she with a winning ditziness and he with an easygoing manner that makes him easy to like. 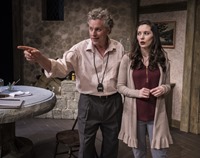 Director Eric Hafen does a fine job keeping this theatrical rollercoaster on track, no simple task with so many red herrings, plot twists and mind games in play. He manages to keep the audience laughing while perched on the edge of their seats.

That composer Rupert Holmes could write such a terrific spoof of the theatrical thriller should be no surprise. He tells quite a surprising tale in “The Pinã Colada Song,” so it’s no shock, I guess that he would succeed in this genre. After all, he did win an Mystery Writers of America’s Edgar Award (the Oscar of crime and suspense), along with a Tony Award for The Mystery of Edwin Drood.

Holmes’ characters may be more two-dimensional than real and the sexual innuendos a lot tamer than they were when the play premiered in 1989, but the witty dialogue, plot complexities and stylish performances make up for that deficiency. Yes, the final scene rings a tad hollow, but the audiences will go along with the fun.

Despite my not being able to give you many clues and a complete critique of the Bickford Theatre’s current production of Accomplice, I recommend that you see it before it closes on February 4. It’s a date-might treat that will keep you scratching your head as you roar in laughter. And you’ll talk about it during coffee afterward. (Note: not appropriate for children; contains adult language and content)

Accomplice will be performed at the Bickford Theatre, 6 Normandy Heights Road, Morristown, through February 4. Call the box office at 973.971.3706 or visit www.morrismuseum.org online for tickets and performance times.

Photos by Warren Westura and the Bickford Theatre.