FESTIVAL OF PLAYS OPENS NEXT FRIDAY IN OCEAN GROVE 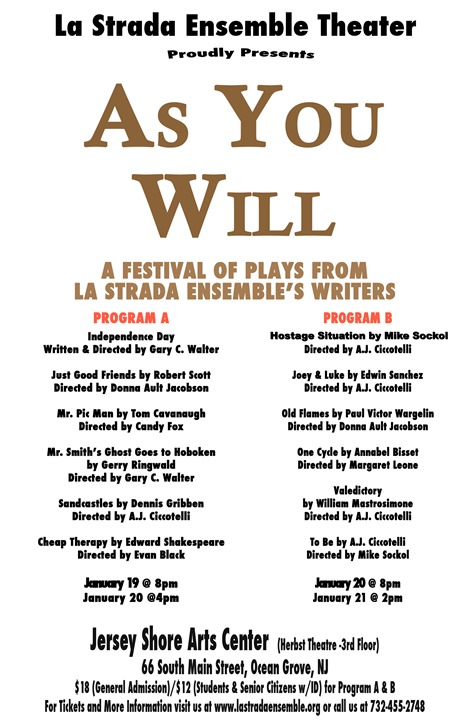 WHEN: January 19-21 (see below)
WHERE: Jersey Shore Arts Center Herbst Theatre, 3rd floor, 66 S. Main Street, Ocean Grove
TICKETS: 18/$12 for students & senior citizens and can be purchased online.
For more information and to purchase tickets please visit us at
www.lastradaensemble.org

Program A
WHEN: Friday January 19th at 8pm & Saturday January 20th at 4pm

Independence Day written & directed by N.Y.C. and Asbury Park Resident Gary C. Walter:  Three siblings, who barely know each other, are summoned home where an anonymous phone call from their mother, who had disappeared many years ago, prompts a prank with lethal consequences.

Just Good Friends by United Kingdom resident Robert Scott & Directed by Dr. Donna Ault Jacobson:  Jane has just broken up with her boyfriend, and Tim is waiting to console her.  But maybe this is his chance to step out of the friend zone?

Mr. Picman by Los Angeles resident and Jersey Shore born Tom Cavanaugh & Directed by Candy Fox:  A mother gets an education when her daughter leaves her cell phone with questionable apps in this hilarious short comedy.

Mr. Smith’s Ghost Goes to Hoboken by Chicago resident Gerry Ringwald & Directed by Gary C. Walter:  In this scathing satire the present mayor of Hoboken Carol Jones gets visited by the ghost of Mr. Smith (via Jimmy Stewart) for some political advice.

Sandcastles by Toms River resident Dennis Gribben & Directed by A.J. Ciccotelli:  Siblings stuck in their home during hurricane Sandy wait for their parents to return battle the storm outside while reminiscing about their childhood on the shores of New Jersey.

Cheap Therapy by Toms River resident Edward Shakespeare & Directed by Evan Black:  A self-titled therapist gives strong advice to his board walk patrons, but can he take someone else when he meets his match?

Hostage Situation by Mike Sockol & Directed by A.J. Ciccotelli:  Two lovers in a precarious situation argue about trivial matters while their lives appear to hang in the balance.

Old Flames by N.J. resident Paul Victor Wargelin & Directed by Dr. Donna Ault Jacobson:  Twenty-five years ago, Kelly attended a carnival with her sister Amanda’s boyfriend.  Tonight, the sisters will fight out who is the owner of the Amanda’s boyfriend’s jacket while Kelly’s husband, Hal, points out the absurdity of the situation.

Joey & Luke by internationally renowned playwright Edwin Sanchez & Directed by A.J. Ciccotelli:  Two friends waiting for their driver’s license at the DMV discover the true meaning of their friendship and their acceptance of each other.

One Cycle by Ocean Grove resident Annabel Bisset & Directed by Margaret Leone:  A tourist uses a laundromat and stumbles upon a crisis between a mother and a daughter that is boldly and comically denied.

Valedictory by legendary playwright William Mastrosimone & Directed by A.J. Ciccotelli:  At their 10-year high school reunion, Curt, who once gave the valedictory speech at graduation, now mops the floor as his former tutee Tom, a CEO enters, this uneasy confrontation.

To Be by Toms River resident A.J. Ciccotelli & Directed by Mike Sockol:  After returning from Hollywood and being fired from his first starring role, a young actor receives words that his high school acting teacher/mentor has passed away leaving him a treasure trove of memories, passion and inspiration.