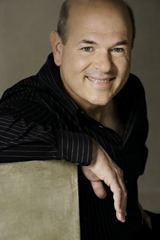 WHEN: Saturday, January 20, at 8 pm
WHERE: Sitnik Theatre of the Lackland Performing Arts Center, 715 Grand Ave., Hackettstown
TICKETS: $48 for adults and children in advance.  As with all concerts, jazz and special events ticket prices increase $5.00 day of performance.
The performance is presented in partnership with the Hackettstown Rotary Club.  Proceeds to benefit Hackettstown Rotary Club local scholarships.
For more information or to purchase tickets visit centenarystageco.org or call the CSC box office at (908) 979 – 0900.  The box office is located in the Lackland Center; 715 Grand Ave. Hackettstown, NJ.  Box office is open Monday through Friday from 1 – 5 pm and two hours prior to each performance.  Centenary Stage Company can also be found across social media platforms; Facebook, Instagram and Twitter.  Like and follow to receive the latest in CSC news and special offers.

Hollywood's most recognizable face, Larry Miller returns to Centenary Stage Company for  a special fundraiser stand-up performance.  Actor, comedian and writer Larry Miller has an extensive career spanning over 100 film/television credits and Broadway performances. He began his career alongside Richard Gere and Julia Roberts in Pretty Woman.  Miller has since gone on to unforgettable roles in such films as The Princess Diaries, The Nutty Professor, Bee Movie and 10 Things I Hate About You. He's also a proud member of Christopher Guest's ensemble cast in the films Waiting for Guffman, Best in Show, A Mighty Wind and For Your Consideration.

Miller has made dozens of appearances on The Tonight Show with Jay Leno, The Late Show with David Letterman and Real Time with Bill Maher. He has also starred in his own HBO comedy specials and on Broadway in Neil Simon's play, The Dinner Party. His other television credits include Seinfeld, Desperate Housewives, Medium, Burn Notice and Law & Order, in addition to a recurring role on Boston Legal. Miller is the also the only "bad guy" to return on Law and Order as an unrepentant – and uncatchable – wife killer.  He currently hosts the weekly podcast called The Larry Miller Show about the absurdities of everyday life, and he’s a humorist for both the Huffington Post and The Weekly Standard as well as the author of the best-selling book Spoiled Rotten America.  Miller frequently tours the country with his one-man comedy show, Cocktails with Larry Miller.