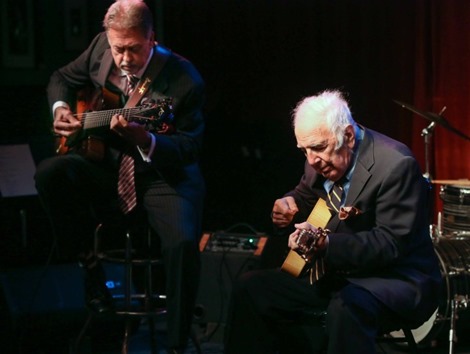 WHEN: Monday, January 8, at 7:30 PM
WHERE: Bickford Theatre is located at 6 Normandy Heights Road in Morristown, NJ, and offers free parking and full accessibility
ADMISSION: $20 for museum members, $22 in advance, and $25 at the door
Tickets may be purchased online at morrismuseum.org/jazz-showcase.
Box office hours for phone sales are Monday through Friday, 10:00 am to 5:00 pm. Walk-up hours are Tuesday through Friday, 11:00 am to 5:00 pm. (Above: Ed Laub and Bucky Pizzarelli; photo courtesy of Steven Sorokoff.)

The Bickford Theatre presents the annual birthday bash for Hall of Fame guitarist Bucky Pizzarelli. Bucky, who turns 92 on January 9, has been at this annual birthday party every year with the exception of his 90th when he was in the hospital. He will bring an all-star ensemble with him including his sons John and Martin Pizzarelli, along with Ed Laub on guitar, Russ Kassoff on piano, Linus Wyrsch on sax, and Aaron Weinstein on violin. Bucky’s oldest friend, Jerry Bruno, will also perform on a couple of songs.

A master of the 7-string guitar, Bucky is one of the most beloved jazz musicians to ever come out of New Jersey. Born in Paterson, Pizzarelli began his professional career with the Vaughn Monroe dance band in 1944. In the early fifties he became a staff musician for NBC and ten years later joined The Tonight Show Band where he even accompanied Tiny Tim. He was also a much sought-after studio musician playing on many rock hits of the day including all seven hits by Dion and the Belmonts. He has been honored many times by the music community including inclusion on the ASCAP Jazz Wall of Fame and election to the New Jersey Hall of Fame.

Bucky’s two sons John and Martin Pizzarelli will appear, making the concert even more special. John is a world-renowned guitarist and singer who has been hailed by the Boston Globe for “re-popularizing jazz.” His most recent work has focused on reimagining the songs of Paul McCartney, Frank Sinatra, and Antonio Carlos Jobim. John and his Quartet maintain a very busy schedule and are preparing for a week-long engagement at New York’s Birdland Jazz Club starting on January 16.

Martin is an accomplished bass player who made his reputation performing with brother John for many years. In the past couple of years, Martin has been on his own, working regularly with his dad as well as with Ed Laub, Gene Bertoncini, and Monty Alexander. He has appeared on more than 30 CDs and has played venues ranging from New York’s Carnegie Hall to the Morristown Jazz & Blues Festival.

Guitarist Ed Laub grew up in a family of musicians and studied the 7-string guitar with Bucky who eventually invited him to become his regular partner. He and Bucky perform together all over the world although in the last couple of years he has managed to temper the rigorous schedule for his partner. Ed has most often been compared to the great Kenny Rankin which he considers an honor. All About Jazz praised the duo, writing that “Pizzarelli is the complete jazz musician and Laub complements him perfectly.”

The sextet also includes pianist Russ Kassoff who is highly regarded as a jazz pianist, conductor, composer and arranger. Kassoff has toured with icons as varied as Frank Sinatra, Charles Aznavour and Liza Minnelli and has his own trio with Jay Anderson and Dennis Mackrel. Violinist Aaron Weinstein is still only in his early thirties but has already performed with a long list of jazz greats including Les Paul, John Pizzarelli, Dick Hyman, Dave Frishberg, Jon Hendricks, Annie Ross and, of course, Bucky Pizzarelli. Reedman Linus Wyrsch was born and raised in Switzerland before moving to Boston to attend the Berkley College of Music in 2008. Upon graduating summa cum laude from Berkley, he moved to New York where he has maintained a very busy schedule as a sideman and leader.

Bassist Jerry Bruno met Bucky when they worked together in the 1940’s in the Vaugh Monroe Orchestra. The two have been friends ever since, performing together frequently although in recent years those opportunities have been reduced. Jerry has performed and recorded with Frank Sinatra, Tony Bennett, Liza Minelli, Tommy Dorsey, and Louis Prima. Jerry will turn 98 on January 10.