100 Years of Broadway recreates the greatest moments from the finest shows of the century featuring the actual stars of shows, such as The Phantom of the Opera, Les Miserables, CATS, Jesus Christ Superstar, and Jekyll & Hyde. These amazing performers light up the stage with songs from the hit shows in which they starred. Neil Berg presents brilliantly revived arrangements of Broadway classics as well as thrilling numbers from Broadway’s newest hit shows.

Neil Berg is the composer/lyricist of the hit off-Broadway musical The Prince and the Pauper, which ran for two years at the Lamb’s Theater in New York City. 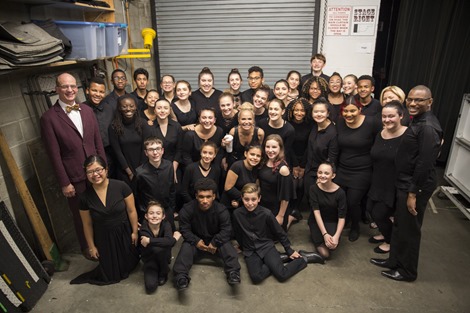 A group of students from the Performing Arts School at bergenPAC auditioned into the Chamber Chorus. They perform across the region at special events, as well as on the bergenPAC main stage with headliners like Broadway star Kristin Chenoweth (above, center) and Country legend Kenny Rogers.