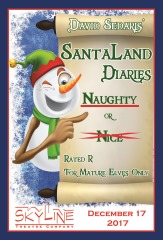 WHEN: Sunday, December 17, at 3:00pm
WHERE: George Frey Center for Arts and Recreation in the Fair Lawn Community Center, 10-10 20th Street, in Bergen County’s Fair Lawn
TICKETS: $20 to $29 and are on sale through Skyline’s online box office at SkylineTheatreCompany.org and its in-person box office at 800-474-1299.
For ticket reservations or for more information about Skyline go to SkylineTheatreCompany.org 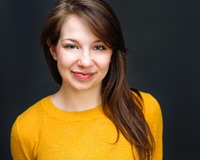 Based on an essay by David Sedaris first read on National Public Radio in 1992, The Santaland Diaries was adapted for the stage as a one-man, one-act play by Joe Mantello and debuted in 1996. It is the humorous account of Sedaris’ stint working as a Christmas elf in Macy’s Santaland in 1989.

Skyline Theatre Company’s professional theatrical production will be presented  at the. The play contains mature content and is not recommended for pre-teenaged children.

About Skyline Theatre Company
Founded in 1995, Skyline Theatre Company’s mission is to bring together professional artists to create quality theatre that entertains and inspires an audience. We make commitments to the education of young people in all aspects of the arts and to cultivating and nurturing new artists and their works.

Skyline Theatre Company is a proud Associate Member of the New Jersey Theatre Alliance. As a 501(c)3 non-profit organization, Skyline Theatre Company depends on private donations, corporate sponsorships, grants, and supportive audiences to fund its programming. Funding is made possible in part by the New Jersey State Council on Arts/Department of State, through grant funds administered by the Bergen County Department of Parks, Division of Cultural and Historic Affairs.