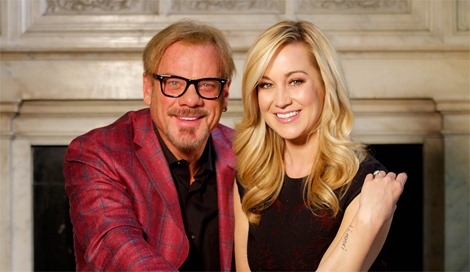 WHEN: Wednesday, December 20, 2017, 8pm
WHERE: State Theatre New Jersey, 15 Livingston Ave., New Brunswick
TICKETS: $35-$75
For tickets or more information, call State Theatre Guest Services at 732-246-SHOW (7469), or visit us online at STNJ.org. State Theatre Guest Services, located at 15 Livingston Ave, New Brunswick NJ, is open Monday through Friday from 10am to 6pm; Saturday from 1pm to 5pm; and at least three hours prior to curtain on performance dates unless otherwise specified. For information on group outings and discounts, call 732-247-7200, ext. 536. Some additional ticket and transaction fees may apply.

Program will include Vassar and Pickler’s hits and holiday favorites.

Phil Vassar began his career as an artist in the late 1990’s by writing songs which were recorded by several country music stars such as, Tim McGraw, Alan Jackson, Jo Dee Messina, and David Nail. All the songs he wrote for them and other artists were hits and reached no. 1 on the charts; his song “Bye, Bye” even gave him his first American Society of Composers, Authors, and Publishers award for song of the year.

Since that point Vassar has released several albums such as, American Child, Shaken Not Stirred, and American Soul, and released dozens of singles such as, “Carlene,” “In a Real Love,” and “American Child,” and even put out the charity single, “Words Are Your Wheels,” with vocals from Kenny Chesney, Brooks & Dunn, Martina McBride, and Sara Evans to promote literacy. He has also produced songs for various TV shows. Along with his other albums, Vassar has also released a Christmas album featuring five original and five classic holiday songs.

At the age of 19, Kellie Pickler gained fame as a contestant on the fifth season of American Idol. In 2006, she signed with 19 Recordings/BNA Records and released her debut album, Small Town Girl, which has gone on to sell more than 900,000 copies worldwide and produce three hit singles: “Red High Heels,” “I Wonder,” and “Things That Never Cross a Man’s Mind.” She followed that in 2008 with her self- titled sophomore record, featuring country radio hits “Don’t You Know You’re Beautiful,” “Best Days of Your Life” (co-written with Taylor Swift and her first Top 10), and “Didn’t You Know How Much I Loved You.” Having established herself as not only a powerful vocalist but also a songwriter, Pickler released her third studio album, 100 Proof, in 2011 to huge critical acclaim. The album was named the No. 1 Country Album of The Year by Rolling Stone and was listed on “Best of 2012” list by Washington Post.

In spring of 2013, Pickler partnered with dance coach Derek Hough and won the Mirror Ball Trophy on Dancing with the Stars. That same year, she also released her fourth album, The Woman I Am, with Black River Entertainment, which featured three songs co-written by Pickler including the title cut.

Her CMT docu-comedy series I Love Kellie Pickler which co-stars her husband, songwriter/producer Kyle Jacobs, debuted in November 2015, propelling the network to its highest premiere with adults since 2012 and women since 2008. The hit television series returned for a second season in August 2016.