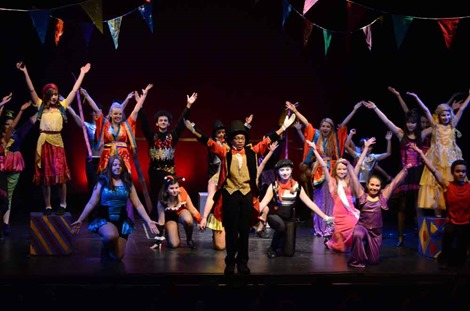 WHEN: December 9 through December 17.
WHERE: Little Theatre located at 400 Jefferson Street, Hackettstown.
TICKETS: $12.50 for adults and $10 for children under 12
Tickets may be purchased online at centenarystageco.org or by calling the CSC Box Office at (908) 979-0900.

Hailed as a “state treasure” by Peter Filichia of the Star Ledger and bringing in youth from Morris, Warren, Hunterdon and Sussex counties, Centenary Stage Company’s Young Performance Workshop is one of the few young actor training programs in the country that combines formal training with practical application.

Based on the novel, 7 ½ Cents by Richard Bissell and featuring a book by George Abbott and Richard Bissell with music and lyrics by Jerry Ross and Richard, The Pajama Game was awarded the 1955 Tony for Best Musical and, over half of a century later, claimed the award for Best Revival of a Musical, proving that the story is truly timeless. With an energetic score by Richard Adler and Jerry Ross (Damn Yankees), The Pajama Game is brimming with songs and dances that have become musical theatre standards, including "Steam Heat" and "Hernando's Hideaway."  Conditions at the Sleep-Tite Pajama Factory are anything but peaceful as sparks fly between new superintendent, Sid Sorokin, and Babe Williams, leader of the union grievance committee. Their stormy relationship comes to a head when the workers strike for a 7 ½ cent pay increase, setting off not only a conflict between management and labor, but a battle of the sexes as well.

JOSEPH AND THE AMAZING TECHNICOLOR DREAMCOAT

One of the most enduring shows of all time, Joseph and the Amazing Technicolor Dreamcoat features lyrics by Tim Rice and music by Andrew Lloyd Webber. It is a reimagining of the Biblical story of Joseph, his father Jacob, eleven brothers and the coat of many colors.  Told entirely through song with the help of a main character Narrator, the musical follows preferred son Joseph. After being sold into slavery by his brothers, he ingratiates himself with Egyptian noble Potiphar, but ends up in jail after refusing the amorous advances of Potiphar’s wife. While imprisoned, Joseph discovers his ability to interpret dreams, and he soon finds himself in front of the mighty but troubled, Elvis-inspired, Pharaoh. Joseph’s solution to Egypt’s famine elevates him to Pharaoh’s right-hand man and reunites him with his family.  The magical musical is full of catchy songs in a variety of styles, from a parody of French ballads (“Those Canaan Days”), to country-western (“One More Angel in Heaven”) and calypso (“Benjamin Calypso”), along with the unforgettable classics “Any Dream Will Do” and “Close Every Door.”

The Tony Award winning lyricist of A Chorus Line, Edward Kleban was determined on writing both the words and music for a Broadway show, a goal unrealized in 1987 when he died of cancer at the age of 48.  Kleban’s music and lyrics combined with a book by Linda Kline and Lonny Price the biographical musical A Class Act garnered the acclaim Kleban always deserved.   Ed got his start in the BMI Musical Theater Workshop where he largely amasses the charismatic songbook that has been arranged in A CLASS ACT to dramatize Ed's often hilarious, ultimately heartbreaking journey. An ensemble of 7 inhabit the colorful gallery of friends and loved ones in Ed's life including the legendary acerbic Lehman Engle, the relentlessly peppy Marvin Hamlisch, and Uber-creative Michael Bennett.  Fourteen years after his death, one of the theater's unsung champions finally got the recognition he always deserved in this vibrant musical about musicals.

The YPW program has been led by Broadway, film and television veteran, Michael Blevins, for over 20 years. YPW is dedicated to the enrichment of young lives through experience in the theatre arts, and serves as a venue for cultivating young theatre performers. The program is one of only a handful in the nation that offers both formal training and production experience for young people.  The Young Performers Workshop is part of the educational arm of the professional Centenary Stage Company, a professional Equity theatre in residence on the campus of Centenary University.

Centenary Stage Company’s Young Performers Workshop is also seeking new and returning applicants ages 8 - 18 for the upcoming spring session.  The 15-week Spring Session runs February 10 through June 3 and culminates with a two week Festival of Shows.  The Young Performers Workshop is one only a handful of programs in the nation that combines a classroom like theatre arts education with the practical application of a “production process.”  The program is designed to meet the needs of beginning, intermediate and advanced performers interested in working in theatre.  Although no experience is necessary all new applicants must attend an interview prior to admittance into the program.  Interviews will be held December 16 and 17 at 11am in the Little Theatre.  Interviews will be held by appointment only.  To schedule an interview appointment call the box office directly at 908.979.0900.

The 2017 -18 season of performing arts events at the Centenary Stage Company is made possible through the generous support of the Geraldine R. Dodge Foundation, the NJ State Council on the Arts, the Shubert Foundation, the Blanche and Irving Laurie Foundation, the Sandra Kupperman Foundation, and CSC corporate sponsors, including Premier Season Sponsor Heath Village Retirement Community, The House of the Good Shepherd, Silver Sponsors Hackettstown Medical Center, Home Instead Senior Care (Washington), and Fulton Bank of New Jersey, and Centenary Stage Company members and supporters.